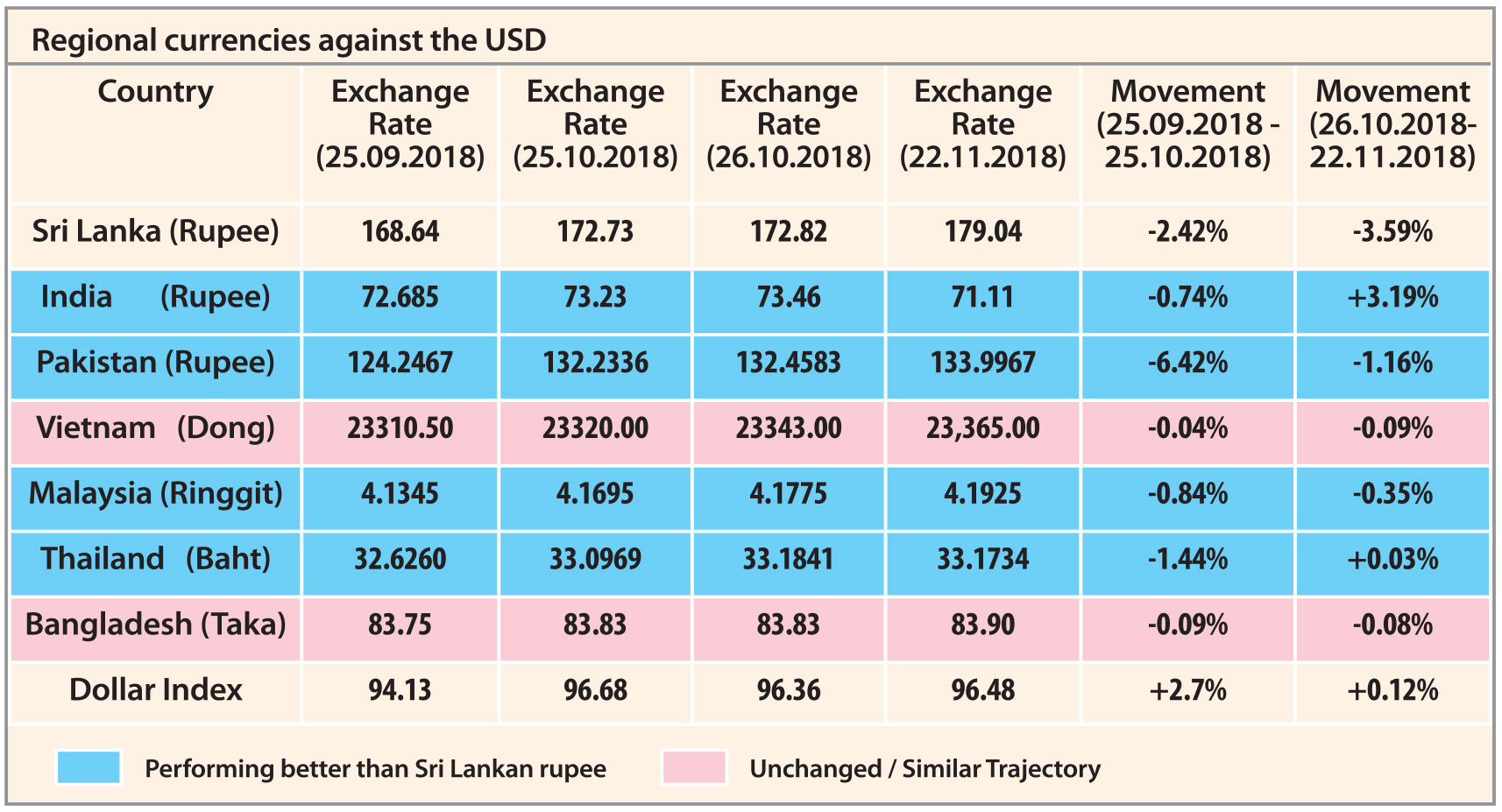 November 25, 2018 by themorninglk No Comments

– LKR goes down as they go up

– Fails to capitalise on dollar weakening

The depreciation of the Sri Lankan rupee (LKR) against the US dollar has accelerated over the past two months even though other regional currencies have either strengthened or depreciated minimally against the dollar over the same period.
Research carried out by The Sunday Morning Business on currency depreciation in regional economies revealed that since the political crisis erupted on 26 October, the rate of depreciation of the Sri Lankan rupee accelerated, while four other currencies have strengthened.
The other currencies taken into account for the purposes of comparison were the Indian rupee, Bangladeshi taka, Pakistani rupee, Vietnamese dong, Malaysian ringgit, and Thai baht.
Vietnam and Bangladesh have maintained a similar trajectory of depreciation over these two months; while the other four countries have seen their currencies strengthening during the period between 26 October and 22 November (during the political crisis) in comparison with the period between 25 September and 25 October (pre-political crisis).
It is also noteworthy that the strengthening of the US dollar, which led to the rapid weakening of emerging market currencies this year, has slowed down over the past four weeks. While this has helped other regional currencies, as well as global currencies, to recover, it appears to have had no positive impact on the Sri Lankan rupee.
Measured by the dollar index movements, prior to the crisis, the dollar strengthened by 2.7% and since 26 October, it has recorded a slower rate of appreciation of 0.12%.
The Dollar Index is an indicator of the value of the US dollar in relation to a basket of foreign currencies which comprises the euro (EUR), Japanese yen (JPY), pound sterling (GBP), Canadian dollar (CAD), Swedish krona (SEK), and Swiss franc.
It is also interesting that, contrary to views expressed by the then Government that the rate of depreciation of the Sri Lankan rupee in the pre-crisis period was less than other regional currencies, it had in fact been worse than all other currencies in this table with the exception of Pakistan.
Suffering from depreciation since the beginning of 2018, the recent recovery in these regional currencies has been driven by a fall in global crude oil prices over the last couple of weeks and a weakening US dollar.
The Sri Lankan rupee (LKR) fell to a record low of 180.66 against the dollar on Friday (23), three days after Moody’s downgraded the country’s credit rating for the first time since it started rating the country in 2010, owing to the worsening political crisis. The LKR has fallen 17.7% so far this year.

February 4, 2020 bythemorninglk No Comments
The Government has decided to continue with the National Export Strategy (NES) created during the tenure of the previous Government, a step that bodes well for policy consistency in the country.

February 2, 2020 bythemorninglk No Comments
Against the backdrop of the global coronavirus outbreak, Chinese travellers are reported to be cancelling scheduled trips to Sri Lanka en masse, with February and March arrivals expected to hit record