12 killed by gunman at government building 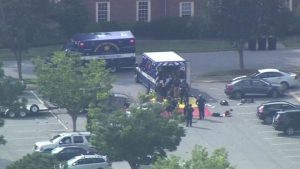 At least 12 people were killed and several injured on Friday in a mass shooting at a government building in the US state of Virginia.

The gunman, whose identity was not released, was killed in an exchange of gunfire with police.

Officials said an officer was wounded when a bullet struck his vest.

How did the shooting unfold?

The area, which contains a range of city government buildings, was put into lockdown by police and employees were evacuated.

“We just heard people yelling and screaming at people to get down,” Megan Banton, an administrative assistant in the building, told local television news station WAVY.

Another employee told the AP news agency she and others heard shooting, but did not think the gunfire was close.

“I just thank god they were able to alert us in time, because if it had been 10 minutes more we would have all been outside,” Sheila Cook said.

Police Chief James Cervera said the gunman returned fire on police officers at the scene and was killed in the exchange.

Police said they believed the gunman had acted alone.

What is known about the victims?

The identities of the 12 people killed were not released by authorities.

At least six people are known to have been wounded, including a police officer, but the severity of their injuries remained unclear.

The injured officer’s life was saved when a bullet struck his vest, Chief Cervera told reporters.

A White House spokesman said President Trump had been briefed about the shooting.

The FBI was at the scene helping local authorities investigate the shooting, US media reported.

Virginia Beach is the state’s most populous city – with about 440,000 residents. (BBC)

February 18, 2020 byTSM Web Desk No Comments
A document that appears to give the most powerful insight yet into how China determined the fate of hundreds of thousands of Muslims held in a network of internment camps has been seen by the BBC.

Huawei’s use of Android restricted by Google

May 20, 2019 byRandev No Comments
Google has barred the world's second-biggest smartphone maker, Huawei, from some updates to the Android operating system, dealing a blow to the Chinese company.