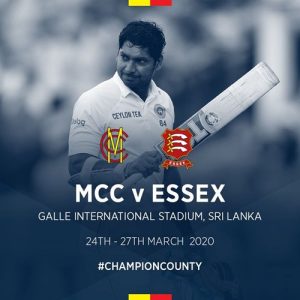 The Marylebone Cricket Club (MCC) team is to play Essex at the Galle International Stadium in Sri Lanka in March 2020.

The ‘Champion County Match’ is the traditional curtain-raiser to the English domestic season. MCC will be taking on the Specsavers County Championship winners, Essex in next year’s match.

MCC President Kumar Sangakkara is to captain their team in the match which will take place from 24-27 March 2020.

The MCC World Cricket Committee will also meet in Sri Lanka during a two-match Test series between Sri Lanka and England, to take place during the same time in Sri Lanka.

“It is hugely important to support cricket in countries such as Sri Lanka and taking the Champion County match to Galle is a fantastic way for the Club to provide its backing for the game on a global level. With England touring the country during the same period, this will make for an exciting sequence of events in Sri Lanka and, as one of the best cricketing destinations in the world, it will be a wonderful occasion for all involved. I am looking forward to playing for and indeed captaining the MCC team, which will be full of exciting young talent ready to challenge the County Champions.”

“Sri Lanka Cricket wish to thank MCC for choosing Sri Lanka as its venue to play the MCC Champion County Match in 2020, which we consider as an honour and a privilege bestowed upon the cricket loving public of our country. We are happy to be the host of this historic encounter, which marks the curtain-raiser to the new English domestic season. It is also very fitting that this team is led by none other than our own Kumar Sangakkara, who has recently become the first non-British MCC President.”

MCC is the world’s most active cricket club, the owner of Lord’s ground and the guardian of the Laws and Spirit of the game. Founded in 1787, it is recognised as the sole authority on the game’s Laws and moved to its current home in St. John’s Wood in 1814. There are approximately 18,000 Full and 5,000 Associate Members of MCC.

October 27, 2019 byThe Sunday Morning No Comments
34 Sri Lanka cricketers were awarded with central contracts in five tiers, divisions “A”, “B”, “C”, “D” and the Primary division. Angelo Mathews secured the highest contract of $ 130,000

SL to end up medal-less in 18th Asian Games?

August 27, 2018 byRevatha No Comments
As most of the medal prospects flop, SL is likely to end up only the fourth Asiad without any medals