Members of Parliament Premalal Jayasekara and Rishad Bathiudeen were brought to Parliament by the Department of Prisons yesterday (22).

The second day of the debate on the 20th Amendment to the Constitution also took place yesterday. 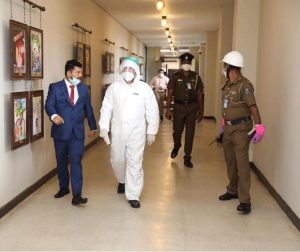 The former Minister was transported to Parliament in a prison bus accompanied by several prison guards.

He was reportedly allocated a special seat within the chamber as well.

Bathiudeen, who was arrested by the Criminal Investigation Department (CID) on Monday (19), was remanded until 27 October by the court.

He is accused of allegedly misusing 222 buses belonging to the state-owned Sri Lanka Transport Board (SLTB) for transporting internally displaced persons (IDPs) from Puttalam to polling stations in Silavathurai, Mannar, during the 2019 presidential election.

Serjeant-at-Arms of Parliament, Narendra Fernando yesterday informed the Secretary to the Ministry of Health and Indigenous Medicine to take steps to allow the Vanni District Parliamentarian to participate in the sittings of Parliament yesterday and today (23).

August 29, 2018 byEaswaran No Comments
A Chinese funded housing project in the North and East has been suspended following objections raised by India.