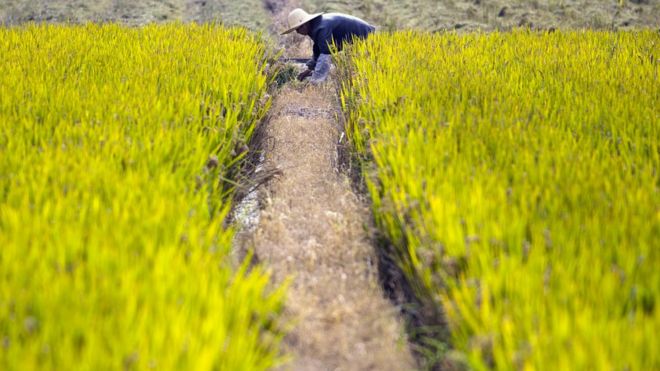 US imposes new tariffs on $ 200bn of Chinese goods

The US is imposing new tariffs on $ 200bn (£ 150bn) worth of Chinese goods as it escalates its trade war with Beijing.
These will apply to almost 6,000 items, marking the biggest round of US tariffs so far.
Handbags, rice and textiles will be included, but some items expected to be targeted such as smart watches and high chairs have been excluded.
The Chinese commerce ministry said it had no choice but to retaliate.
In a statement, the ministry said that it hoped the US would correct its behaviour, but did not specify what actions it would take.
The US taxes will take effect from 24 September, starting at 10% and increasing to 25% from the start of next year unless the two countries agree a deal.
President Donald Trump said the latest round of tariffs was in response to China’s “unfair trade practices, including subsidies and rules that require foreign companies in some sectors to bring on local partners.
“We have been very clear about the type of changes that need to be made, and we have given China every opportunity to treat us more fairly.
“But, so far, China has been unwilling to change its practices,” he said.
He also warned that if China retaliated then the US would “immediately pursue phase three” which would mean imposing further tariffs with taxes on another $ 267bn worth of Chinese products.
If he does go ahead with a further $ 267bn worth of tariffs, it would mean virtually all of China’s US exports would be subject to new duties.
Chinese stock markets opened lower on Tuesday.

Hasn’t the US already imposed tariffs?
Yes, it has. In fact, this latest round marks the third set of tariffs put into motion so far this year.
In July, the White House increased charges on $ 34bn worth of Chinese products. Then last month, the escalating trade war moved up a gear when the US brought in a 25% tax on a second wave of goods worth $ 16bn.
This latest round means that around half of all Chinese imports to the US are now subject to the new duties.
It is also the biggest set of tariffs to date, and unlike the earlier rounds this latest list targets consumer goods, such as luggage and furniture.
That means regular households may start to feel the impact from higher prices.
US companies have already said they are worried about the effect of higher costs on their businesses and warned of the risk of job cuts.
While economists generally estimate that the tariffs will have little impact on the overall US economy, they have warned that the effects are difficult to predict.

Which items have been targeted?
Officials have said they want to shield consumer goods from the taxes as much as possible.
But many everyday items such as suitcases, handbags, toilet paper and wool are included in this latest round of tariffs.
The list also includes several food items from frozen cuts of meat, to almost all types of fish from smoked mackerel to scallops and soybeans, various types of fruit and cereal and rice.
Products that help computer networks operate, such as routers, are also targeted.

Which items are exempt?
The list slated for tariffs originally included more than 6,000 items, but US officials later removed about 300 types of items, including smart watches, bicycle helmets, play pens, high chairs and baby car seats.
The changes come after fierce opposition from companies, including global tech giants such as Apple, Dell and Hewlett Packard Enterprise.
The firms are worried the tariffs will increase their costs since many of their products are manufactured in China.
Earlier this month, Apple wrote to US Trade Representative Robert Lighthizer warning that consumers would have to pay more for its products as a result of the proposed tariffs.
At the time, President Trump replied with a tweet urging Apple: “Make your products in the United States instead of China.”

Why is the US doing this?
The White House says its tariffs are a response to China’s “unfair” trade policies.
In theory, the tariffs will make US-made products cheaper than imported ones, and so encourage consumers to buy American. The idea is they would boost local businesses and support the national economy.
US officials hope the risk of economic harm will convince the Chinese government to change its policies.
The BBC’s Asia business correspondent Karishma Vaswani said the escalating trade war between the two countries is in part due to a lack of understanding of the other’s position.
“Given the diametrically opposing views Washington and Beijing have of their problems, this trade war is unlikely to get better before it gets worse – for them, or for any of us.”
Many US businesses are critical of the tariffs.
Farmers, manufacturers, retailers and other industry groups have formed a coalition to oppose the tariffs, calling them taxes on American families.
“Tariffs have already resulted in layoffs, and this escalation will continue to squeeze American businesses with higher input costs and American farmers with decreasing commodity values,” said Jonathan Gold, a spokesman for the coalition.

How has China responded?
The Chinese have previously hit back with tariffs on $50bn worth of US products in retaliation, targeting their response against key parts of the president’s political base, such as farmers.
The government has outlined a plan to impose further tariffs on roughly $60bn worth of US goods, and threatened other measures.

Are the two sides talking?
Not really.
Talks between high-level officials ended in May without resolving the matter. Efforts to restart discussions have failed to progress.
US and China officials had discussed a new round of talks over the past week, but Trump’s latest move is likely to sour relations further.
China is reported to have said it would reject new trade talks if Trump imposed the $ 200bn worth of tariffs on its exports.
Trump’s economic adviser, Larry Kudlow, earlier said they were still happy to talk: “We are ready to negotiate and talk with China anytime they are ready for serious and substantive negotiations,” he said. (BBC)