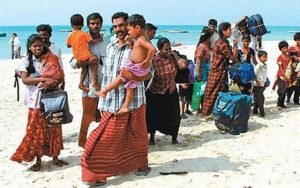 UNHCR speaking to The Sunday Morning said refugees preferred the ferry service as they could bring as much belongings as possible.

In June this year, Indian media reported that 2,000 refugees had expressed their willingness to go back to their home country.

However, the number of refugees willing to go back was not big enough for the State government(Tamil Nadu) to approach the Central government of India as the existing number of applicants could be covered in a couple of rounds, Indian media said.

According to the UNHCR, 966 Sri Lankan refugees including 436 families were repatriated from India this year.

However, the UNHCR said It did not have access to such camps.

Since the end of the armed conflict in Sri Lanka in May 2009, increasing numbers of Sri Lankan refugees and asylum-seekers outside the country have been considering the possibility of voluntary repatriation.

Refugees on arrival are provided with a Re-integration Grant, Non-Food Item (NFI) grant and a Transportation allowance from the UNHCR.

Recently, the Indian government said it would examine a proposal put-forth by the Tamil Nadu state to provide dual citizenship for Sri Lankan refugees.

According to the UNHCR, 1034 refugees and 370 asylum seekers from countries such as Pakistan and Afghanistan are housed in the Island.

March 1, 2020 bythemorninglk No Comments
The hurriedly constructed exit to Weeraketiya on the Southern Expressway’s Matara-Hambantota stretch was not in the original plan or blueprint of the expressway, The Sunday Morning learnt.