A case of no action, talk only? 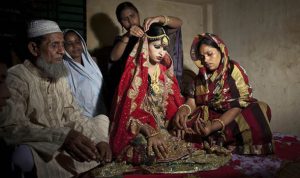 In the aftermath of the Easter Sunday attacks, personal laws – Kandyan law, Thesavalamai, and Muslim law – are facing severe backlash.

In this backdrop, Prime Minister Ranil Wickremesinghe and the Muslim Personal Law Reform Action Group (MPLRAG) have announced a need for the reformation of these laws, with specific reference to the Muslim Marriage and Divorce Act of 1951 (MMDA).

The Prime Minister stated the MMDA will be amended so the legal age of marriage for all civilians will be revised to 18 years. At a briefing for the diplomatic heads of Colombo, Wickremesinghe stated that a reunification of the country under one common law is in order to ensure deradicalisation.

The MPLRAG stated, in a report titled “Muslim Women’s Demands on Reforms on the MMDA”, that the MMDA allows the quasi-judicial system to discriminate and deprive citizens of their fundamental, human, and civil rights.

We sought President’s Counsel Ali Sabry’s opinion on the matter. He stated that he believed the personal laws were indeed outdated.

“I don’t think these personal laws are necessary for moving forward. Polygamy has almost ceased to exist. However, at present, with the situation of the country, abolishing these laws can be viewed as a threat to society,” he said.

It was recently noted that the mastermind behind the shocking attacks on Easter Sunday, Zahran Hashim, married his wife, Abdul Carder Fathima Zadiya, when she was just 15 years old, with the consent of her parents. This was revealed later by the Fathima Zadiya’s father upon interrogation.

Former President of the Court of Appeal and Supreme Court, Justice Saleem Marzoof, who is heading the committee which was appointed in 2009 to make a report on the MMDA, stated that after nine years, the committee had managed to give a comprehensive report to the current Justice Minister Thalatha Atukorale.

Speaking to The Sunday Morning, Justice Marzoof said: “The concept of one law is a fallacy. Even in secular countries, laws have accommodated and are sensitive to the customs of the various communities, including aboriginals.”

He stated that even if the concept of “one law” was practiced in a country, there should be exceptions. He explained: “Otherwise, how can those long-entrenched concepts such as lunacy and minority in contracts, self-defence as defence to murder, exceptions to intellectual property rights in cases of research and study, etc. be explained?

“In all these cases, the lunatic and minor, the person engaged in self-defence, the researcher and student are treated separately by the law as persons to whom certain unique circumstances apply.”

Likewise, Justice Marzoof explained: “If there was ‘one law, one country’, and by ‘country’ I assume what is meant is ‘people’ as the law applies to people, then in every single instance where the law discriminates, whatever the basis for that discrimination, the law will run afoul of the ‘one law – one country’ notion.”

Further, he stated that there is no room in the Constitution of Sri Lanka for a “one country, one law” scenario, and stated: “So even in our general law, as already explained, there is really no room for any ‘one law’ concept if you really break it down.

“Hence, in the final analysis, our legal system has been sufficiently sensitive to the cultural and religious diversity of the people from ancient times, and the call for ‘one law, one country’ during the present tense times appears to be part of the racist campaign that’s going on, especially on social media,” he said.

The MPLRAG stated that the report had not addressed Muslim women’s issues thoroughly.

The MPLRAG said: “We will be compelled to consider the General Marriage Registration Ordinance as a better option in ensuring justice for Muslim women and girls.”

Attorney–at-Law Ermiza Tegal told The Sunday Morning that the call for reform has been longstanding, with mainly Muslim women advocating it.

“There were many female representatives in the committee appointed. But I personally feel that there was not enough support for the committee to conduct extensive research pertaining to women specifically across Sri Lanka. As such, I don’t think women’s concerns are fully represented in the recommendation,” she said.

She also pointed out that there have been disagreements by members of the All Ceylon Jamiyyathul Ulama (ACJU) and others about reforming the MMDA and the quasi-courts.

“Further, they have also spoken out against the reforms which promote the betterment of the conditions of Muslim women and girls,” she further stated.

Tegal also questioned: “So even at this juncture, what is holding these reforms back? Is it these groups; both religious leaders who have taken a position against reforms and political leaders who are not giving sufficient assistance in a way that will help the women and girls of their own communities at this time?”

The lawyer also called out the lack of attention by the State to ensure that these reforms go through, and address the problems of their own citizens.
“There were no concrete decisions taken at the meeting in order to move forward,” she said.

The MPLRAG also addressed this issue by saying it is the State’s responsibility, calling out a statement given by Justice Minister Thalatha Atukorale on the Ministry’s inability to proceed with the process of reform owing to the divided views the Muslim community allegedly upholds.

The organisation demanded that the Minister immediately release the committee report in English, followed by translated versions in Sinhala and Tamil as soon as they are made available. Further, they also requested that the Minister create a space for public debate and consultation on the recommendations made by the committee, especially with women who were most affected. The organisation also demanded that a definite process with a timeline for the enactment of reforms in Parliament be established and publicised by the Government without further delay.

Speaking on this matter, Minister Atukorale said the Ministry cannot move forward without the consultation of the leaders of the Muslim community.
“We can’t just take unilateral decisions on a matter of this importance and significance,” she said.

Sri Lanka’s common law (residuary law) is built on a foundation of Roman-Dutch law which can be traced back to Roman law, Dutch customary and statutory laws, and even Sri Lankan customs and practices, which were supplemented by English law to the extent to which the English Law Ordinance No. 5 of 1852, as subsequently amended, was introduced, and other specific legislation was enacted to embody principles of English law such as the Penal Code, Evidence Ordinance, Sale of Goods Ordinance, and the Bills of Exchange Ordinance.

Muslim women’s demands according to the MPLRAG

1. The minimum age of marriage for all Muslims should be no less than 18 years without any exceptions
2. Women should be eligible to be appointed as quasis, as members on the boards of quasis, marriage registrars, and assessors (jurors)
3. The MMDA must apply uniformly to all Muslims without causing any disadvantage to persons based on sect or madhab (school of jurisprudence)
4. The signatures/thumbprints of the bride and groom are mandatory in all official marriage documentation to signify consent
5. Adult Muslim women are entitled to equal autonomy and need not require the “permission” by law of any “male” relative or quasi to enter into marriage
6. Abolish polygamy. In alternative and at minimum: The consent of existing and intended wives is mandatory and on condition that the husband has the financial capacity to maintain multiple families
7. Divorce rights between women and men must be equal. Procedures for divorce initiated by women and men must be the same, including the appeal process
8. Registration should be required for the legal validity of the marriage
9. Granting and obtaining kaikuli (dowry) to be illegal and attract a penalty
10. Muslim couples must be allowed to draw up their marriage contracts prior to marriage
11. Revise the quasi system to ensure a competent system with improved access to justice for women and men
12. Muslims must be given the option to marry under the GMRO regardless of whether the MMDA undergoes further reform

March 15, 2020 bySarah Hannan No Comments
Humans ingest microplastics when they consume foods such as shrimp, prawns, crabs,.. and on average, people would consume about 5 g of plastic per week through various food sources and drinking water.

July 29, 2019 bythemorninglk No Comments
The inquiry into the Easter Sunday terrorist attack by the Parliamentary Select Committee (PSC) took more twists and turns this week