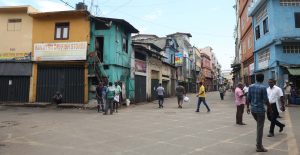 However, the Finance Ministry said that the exact value of the loss incurred has not been evaluated yet.
Customs officers staged a seven-day work-to-rule campaign recently against the removal of Customs Director General P.S.M. Charles and the move to replace her with a retired Navy officer.

The campaign, launched on 30 January, came to an end on Tuesday (5) after Charles was reinstated to the post by the Finance Ministry through withdrawal of the cabinet paper submitted to appoint the retired Navy officer.

Customs Officers’ Union (COU) President Dinusha Hettiarachchi told The Sunday Morning that SLC was yet to assess the actual loss incurred during the strike but it could amount to around Rs. 8 billion.

“We didn’t intend to cause a loss to the economy, but over four of the working days, the customs had incurred a loss of around Rs. 1.2 billion per day and so we roughly assume that the total loss to the country could be Rs. 8 billion,” he explained.

However, the Finance Ministry noted that they weren’t able to assess the total loss to the economy as yet, as they were focussing on controlling the disruption caused by the SLC work-to-rule campaign.

The strike activity had caused backlog pertaining to over 5,000-6,000 containers at the Colombo Port. While the clearance of emergency cargo such as medicines, perishables, and hazardous shipments were given priority, Sri Lanka’s raw material importers felt the pressure.

In addition, businesses mainly in Pettah were severely affected. Early last week, essential food importers and wholesale traders in Pettah closed their businesses and engaged in a hartal against the work-to-rule campaign launched by the SLC trade unions.

The Association of Importers said that they also incurred huge losses.

On Wednesday (6), Finance Minister Mangala Samaraweera held a press conference at his ministry to explain the decision to appoint the retired Navy official Rear Admiral Dr. Shemal Fernando to the post of Director General of SLC.

Responding to the allegations made by SLC trade unions, Samaraweera explained that he had to take such a decision as a measure to control the corruption that was going on in the ports for years.

He said that the revenue of SLC only saw a marginal increase of 1.4% year-on-year to Rs. 921 billion in 2018, while revenue from customs import duty – the primary boarder tax – saw a decline of 28.5%.

According to the Minister, a minimum of Rs. 147 billion in revenue was lost due to leakages, corruption, and smuggling activities involving Sri Lanka Customs.

He went on to state that the SLC should be able to generate a minimum revenue of Rs. 1.5 trillion per annum if these activities cease, the amount of which will ultimately lead to lower indirect taxes such as VAT (value-added tax).

Some of the fraudulent activities involved the exploitation of trade agreements with other countries. For instance, aricanuts and pepper are smuggled to India through the abuse of India-Sri Lanka trade agreements.

The Minister, however, claimed that the fraudulent activities at the Port continued with the blessings of the officials. As such, he went on to state that discipline needed to be maintained in the SLC in order to curtail such fraud and control the officials involved.

DG Charles was heading investigations into the fraudulent activities.

Samaraweera claimed that the Port Mafia was more dangerous than the LTTE, and offered that facing them was indeed more challenging to Charles who fearlessly faced the LTTE during her service as a Government Agent in Batticaloa.

Minister Samaraweera acknowledged the involvement of a member of the Cabinet, but refused to reveal the individual’s name until investigations were complete.

According to Charles, the primary report of the investigations had already been handed over to the Ministry and she expected to complete investigations within the next two months.

“I have already submitted the preliminary investigation report to the Minister. Within another two months, we can complete the full investigation.

“As SLC is the largest state department in operation for a long time, I need a little more time to bring in the necessary reforms to SLC,” she said, adding that she needed more time to end corruption at the ports.

“I’m waiting for Government approval to automate the process and switch to paperless trade at SLC. The new system will eliminate chances of leakages, manipulation, and fraudulent activities,” she added.

The Minister noted that once the full report of the investigation was submitted, he would appoint a committee, led by a former retired judge, to take action in handling fraudulent activities at SLC.

February 9, 2020 bySarah Hannan No Comments
Even after the ban on niqabs and burqas were removed, the public seems to be unaware of it. Earlier last week, a viral video was circulated where a person was videoing a Muslim woman wearing a niqab.

July 8, 2019 bythemorninglk No Comments
World Bank Group in its publication “South Asia’s Hotspots – The Impact of Temperature and Precipitation Changes on Living Standards” projects that by 2050, Sri Lanka’s highly urbanized...