A date with death 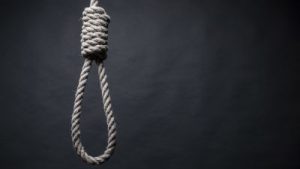 Last week, the President said that he had a date in mind to carry out the executions and that the list of the convicts to be executed had also been finalised.

Ministry of Justice and Prison Reforms Spokesman Nalin Rajapaksha told The Sunday Morning that the list of convicts to be executed had been carefully drawn.

He said that a thorough investigation had been carried out on the convicts on the list who had multiple drug-related charges against them.

Newly-appointed Commissioner General of Prisons Jayasiri Tennakoon said that the President had not yet informed the Prisons Department of a date to carry out the executions.

Speaking to The Sunday Morning, Tennakoon said the procedures were however in place to carry out the death penalty in the near future.

He stated that the Department would ensure all resources were in motion to be prepared when the President notified them of a date.
“The President is doing his utmost not to prolong this excruciating process more than necessary,” he said.

The Commissioner General of Prisons also noted that the last set of interviews for the post of a hangman was scheduled to be on 4 April.
He stated that the Department had shortlisted 40-50 individuals for the interviews.

“There will only be one hangman, there will also be a chosen individual placed on standby in case the hangman chosen cannot fulfil his duties,” Tennakoon said.

Human Rights Watch (HRW) issued a statement last week on President Sirisena’s stance on the death penalty and him romanticising the ideals of the President of the Philippines Rodrigo Duterte and his war on drugs.

The war on drugs refers to Duterte’s drug policy, and he has given instructions to the public to kill suspected criminals and drug addicts.

Research of media institutions and non-governmental organisations have proven that the Philippines Police have murdered unarmed suspects and often planted evidence and carried out executions.

This extreme no-tolerance policy has resulted in the death of 27,000 individuals.

“There is no reason to bring the death penalty back after a four-decade moratorium,” said Human Rights Watch (HRW) South Asian Director Meenakshi Ganguly. She stated that taking Duterte’s drug war as an example is “the worst possible justification and would violate international law”.

The last individual to be executed in Sri Lanka was an individual named “Maru Sira” in August 1975. Proceeding with the scheduled hangings would end a 43-year-old moratorium in the island.

Furthermore, the imposition of the death penalty would violate Sri Lanka’s obligations to international human rights. Having signed and ratified the Human Rights Covenant on Civil and Political Rights Sri Lanka, the country has been a member state of the covenant since 1980, and therefore must adhere to article no. 6 in which it states that the death penalty “may be imposed only for the most serious crimes”.
The United Nations Human Rights Committee, which monitors whether the states adhere to the resolutions, explained in a general comment in 2018 that “the most serious crimes” applies “only to crimes of extreme gravity involving international killing. Crimes not resulting directly and internationally in death, such as drug abuse, could never serve as the basis of the death penalty according to article no. 6 of the framework.

Amnesty International (AI) said that there is no evidence to support the claim that the death penalty had a unique deterrent effect in Sri Lanka, or anywhere else in the world.

In a briefing titled “Sri Lanka: Halt Preparations to Resume Executions”, AI highlights the circumstances under which the death penalty was being imposed on the island.

The briefing clarifies as to how the implication could “claim the lives of people who may have been convicted through unfair trials, and could disproportionately affect people from minority and less advantaged socioeconomic backgrounds.”

AI also highlighted in their briefing of how the trials of “those facing execution could have failed to meet international fair trial standards, due to torture and forced confessions being routinely practised in Sri Lanka’s criminal justice system, as noted by the National Human Rights Commission of Sri Lanka and UN experts.”

Committee to Protect Rights of Prisoners Director Senaka Perera stated that carrying out the death penalty does not cohere to the principles of justice. He also stated that the country has been facing many incidents where justice has come short of its meaning.

He recalled the murders of the two businessmen in Rathgama, and the incident of “kondaya” who was wrongly accused and pressured into confessing the sexual assault of a five-year-old girl as instances where justice fell short of its true meaning.

“We hope that unbiased investigations will take place before the convicts are executed,” he said.

Sri Bodhi Raja Foundation President Ven. Omalpe Sobitha Mahanayaka Thera previously stated that according to the “Agganya Sutra” a ruler of a state is invested with the full powers to ensure peace, defeat terrorism, and national security.

He also called upon a verse “attano kamma kuppanam, tan jano kurupe piyan” which means, “a person who is given a responsibility must see it through, and they shall be praised”.

“Therefore, it is ethical that the President is carrying out the death penalty,” he said. “It is not the place of anyone to question how the President is ruling the country, if he is working in the interest of ensuring peace and harmony,” he added.

“The President has full authority to exercise his powers, and carry out the death sentence if it means that his countrymen will not fall into the hands of evil,” expressed the Thera.

The Pope denounced this doctrine and stated that the death penalty and executions were unacceptable in all cases because they are an attack on “human dignity”.

Held up by court cases

July 8, 2019 bythemorninglk No Comments
The provincial council (PC) elections, having been delayed with the terms of some councils having expired several years ago, are yet to be announced, with two court cases being the deciding factor.