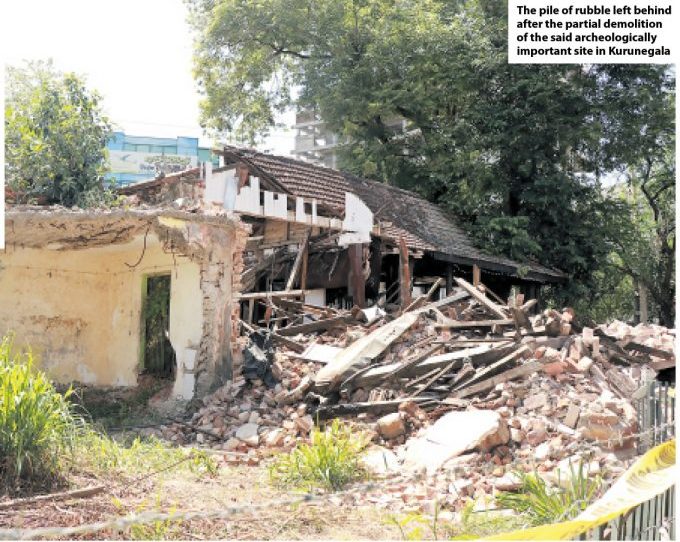 • Plan approved by Yahapalana Govt.
• Executed by incumbent Govt.
• Road expansion on UDA plan for Kurunegala in 2019
• Building demolished to lay drain and expand the road

By Sarah Hannan reporting from Kurunegala

It’s been a week and a half since the demolition of an archeologically important site in Kurunegala was carried out by the Road Development Authority (RDA) without obtaining proper clearance. The Sunday Morning’s visit to the site recently allowed us to understand the reasons behind the demolition.

As we arrived in Kurunegala, we were met with a group of people holding picket signs and allocated a police officer to ensure they stick to the protest route. It was apparent that the protestors had been rallied there by the monks of the nearby temples and was later joined by Samagi Jana Balawegaya (SJB) candidates and their supporters.

The said site stands in the heart of the Kurunegala town, perched on a junction facing the A6 route (Kurunegala-Ambepussa) which was earmarked for expansion, according to the Kurunegala Urban Development Plan 2019-2030 set forth by the North Western Provincial Office of the Urban Development Authority (UDA). The expansion was proposed to minimise traffic congestion which is predicted to worsen once the Central Expressway is built.

“There is quite a lot of infrastructure development that is taking place within the city limits. The road network is centuries old and now with the increase of vehicular and human movement, traffic congestion is becoming unbearable. It takes about 30 minutes just to pass a 2 km section of the city, which is unacceptable,” a visitor to the town told The Sunday Morning.

Commuters through the Kurunegala town see the efforts to widen their existing roads as a positive outcome of such development work. However, he questioned the sudden interest over the building that was demolished, as the place was previously managed by a hotel owner who operated a restaurant within the premises.

Today, the incident has put the Department of Archaeology, the RDA, and the Kurunegala Municipal Council along with its Mayor in a fix, as political parties and their supporters are casting remarks on the illegal demolition of the building, also questioning as to how a hotel was allowed to run within the premises in the first place.

Addressing the media recently, Mayor of Kurunegala Thushara Sanjeewa Witharana alleged that in 1993, the building had been given on a 30-year lease to a person known as Chandrasena by then Minister for Cultural Affairs Gamini Jayawickrama Perera, where Chandrasena’s son Buwaneka had later established a restaurant within the building.

“The media has got the facts mixed up and is now saying that this building was built during King Buwanekabahu II. They have assumed that Buwaneka was in fact King Buwanekabahu II. The building was demolished because it was an illegal structure that was built by the Chandrasena family. If it was a recognised or catalogued area of archaeological importance, how did the RDA, which followed the UDA plan for the Kurunegala Urban Development Plan, have a road expansion map for the area?” he questioned.

The plan which Witharana questioned had been gazetted under 2129/96 of 8 June 2019 by the then Government and consisted of two sections – namely, Volume I and Volume II. Volume I comprised two parts; in the first part, it reported the introduction of the development plan, background studies, and need of the plan. The second part of Volume I consisted of the vision of the plan, goals, objectives, the conceptual plan, and development plans. Volume II of the development plan was prepared as a separate publication that consists of the regulations for plans and buildings, zoning regulations for the period of 2019/30.

Patali Champika Ranawaka, who was the Minister of Megapolis and Western Development at the time, had even written a forward message for the publication in which he mentioned that the preparation of the Kurunegala Urban Development Plan involved extensive consultation with professionals, experts, stakeholders, and the communities, while engaging modern methods, sound techniques, and innovative approaches.

However, as of recent, he has been leading the protests against the demolition of the site for development purposes.

The Sunday Morning contacted former Minister Ranawaka to inquire about the development plan that was published during his tenure as the Minister of Megapolis and Western Development and asked whether the site had been recognised by the Department of Archaeology for preservation purposes.

“During our Government, we took a decision to do away with the old city development plan that was drawn up for Kurunegala; with the participation of an expert panel comprising city planners, RDA engineers, archaeology experts, and other relevant stakeholders, the Kurunegala (Urban) Development Plan was redone, which was published in June 2019,” he explained.

Ranawaka added that the road expansion map that was included in that plan was designed considering the connective routes that led to the Central Expressway. Once that project was completed, they foresaw the need to expand the A6 road that runs in front of the site. According to him, the way they had planned to develop the areas would not have caused any damage to the said site and the Department of Archaeology had by then earmarked it as a site falling under their purview.

“What the present Government did was that they disregarded the importance of the site and went ahead with demolishing the building. It is true that a certain part of the building had been refurbished in the recent years, but the real reason behind this illegal demolition carried out by the Kurunegala Mayor was to make way to build a bigger hotel in the back of the site,” Ranawaka elaborated.

Reiterating that had the incumbent Government at least paid attention to the already published UDA plan, which the RDA had followed when expanding the road and laying the drain, it would have been clear that the site earmarked by the Department of Archaeology was to be left undistributed. Furthermore, there was no reason to demolish the entire building to carry out the road development work in the area, Ranawaka added.

While a full report on the matter was due to be presented to Prime Minister Mahinda Rajapaksa last Thursday (23), Secretary to the Ministry of Buddhasasana, Cultural, and Religious Affairs M.K. Bandula Harischandra told The Sunday Morning that it would probably be delayed further as more findings contesting the site’s historical or archaeological value were being filed. In its stead, an interim report was presented to the Prime Minister on 22 July, the Prime Minister’s Media Division noted.

“As requested by the Prime Minister, who is also the Cabinet Minister for Buddhasasana, Cultural, and Religious Affairs, the committee appointed to consider the evidence presented on the vandalism that was caused by the RDA at the disputed archaeological site in the Kurunegala town will delay for a few more days,” he said.

The committee hosted a media briefing last Friday (24) to update the media as well as the public on the progress of their investigation.

Meanwhile, following consultations with the Police and the Director General of the Department of Archaeology, the Attorney General (AG) on 22 July advised the Acting Inspector General of Police (IGP) that further comprehensive investigations into the destruction of the archaeologically important building in Kurunegala were necessary.

Gazettes declaring the area for development

• The Kurunegala Municipal Council area was declared under the Urban Development Authority Law on 1 June 1979 by the gazette notification bearing No. 38/16.

• The Development Plan for 2006/15 gazetted on 19 September 2006 by the gazette bearing No. 1467/33 had expired, after which the area covering 96 m2 and consisting of 54 grama niladhari divisions of the Pradeshiya Sabha that encompasses the Kurunegala Municipal Council area has been declared under the Urban Development Authority Law by gazette notification bearing No. 1926/20 on 4 August 2015.

• With the development of the Central Expressway, the entire Pradeshiya Sabha area of Kurunegala has been declared under the said Law by gazette notification bearing No. 2068/47 on 28 April 2018.

February 2, 2020 bySarah Hannan No Comments
With individuals potentially infected by the novel coronavirus (2019-nCoV) admitted to the National Institute of Infectious Diseases (IDH) in Angoda the outskirts of the hospital seemed deserted.

March 3, 2019 bythemorninglk No Comments
. Controversy likely to take a back seat
. UNP says will not take disciplinary action