January 26, 2020 by Madhusha Thavapalakumar No Comments 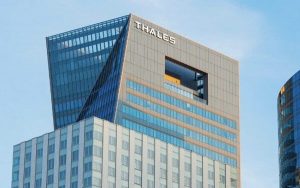 The Airport and Aviation Services (Sri Lanka) Ltd. (AASL) has suspended the awarding of a tender to a French company which has a dubious record internationally, The Sunday Morning Business learns.
AASL Technical Evaluation Committee (TEC) had been considering the awarding of a planned radar system in Piduruthalagala to a French company called Thales Group, despite its chequered history, until the intervention of the AASL Chairman Major General (Rtd.) G.A. Chandrasiri.
Upon the receipt of a complaint made by the Retired Engineers Association (REA), General Chandrasiri had suspended the awarding of the tender and ordered an internal investigation into the tender process.
“I have stopped the whole tender procedure with immediate effect and I’m going through the whole thing with my audit team to check whether the proper procedure is followed. I’m 100% sure it has been done properly. But if it has not been done properly we will not proceed with it,” General Chandrasiri told The Sunday Morning Business.
The complaint dated 13 January 2020, was made to the Minister of Tourism and Civil Aviation Prasanna Ranatunga and was copied to the Secretary to the President P.B. Jayasundara, Secretary to the Treasury and the Ministry of Finance S.R. Attygalle, Secretary to the Ministry of Tourism and Civil Aviation S.M. Mohamed, and General Chandrasiri.
The Sunday Morning Business is in possession of the complaint letter which states that three international companies bid for the project which was to set up a radar system in Piduruthalagala. The bids were closed on 15 November 2018.
According to the letter, the three companies were Thales Group – a French multinational company, Leonardo – an Italian company, and Indra Sistemas – a Spanish company. These companies design and build electrical systems and provide services for the aerospace, defence, and security markets.
The lowest bids were received from Indra and Leonardo which were Rs. 44 million each. Thales’ bid for this project was Rs. 42 million higher than the other two bidders at Rs. 86 million. Despite the higher bidding price, Thales was the frontrunner in the evaluation process, according to a reliable source who wished to remain anonymous.
Further to this, the letter highlights that the TEC was manipulated by two senior officials of the AASL.
The tender was set to be awarded to Thales – France through “serious and significant manipulations and influences upon the TEC and by requesting biased and unwarranted technical clarifications from the other two bidders”, according to the letter.
In addition to this, Thales has been proven to be a failed supplier, as an installation of a secondary radar system at the same location in Piduruthalagala has failed twice due to poor design and technical failures.
The letter also said that Thales was given a similar project of supply, installation, and commissioning of the Aeronautical Information Management System at AASL and the tender awarding had taken place in a biased manner. According to the letter, Thales – France failed to commission the project despite many technical failures and incompatibility with the existing system and other related systems.
Reliable sources told The Sunday Morning Business that if the new radar system installation is also to be awarded to Thales – France, the country will lose money and get no benefits in return as it will be another failure story of Thales.
While highlighting the manipulation in the TEC and failures of Thales in Sri Lanka, the letter appears to have been biased towards the other two bidders Indra and Leonardo, who themselves lack a clean record.
“There was absolutely no reason to ask hundreds of clarifications from Indra – Spain and Leonardo – Italy when they had fully complied with the tender specifications, general conditions of the tender, and also satisfied the reference of installation. It is noteworthy to observe that Leonardo has supplied such equipment to the Singapore Changi Airport and the Maldives Airport very recently,” the letter stated.
However, the research made by The Sunday Morning Business revealed that these three companies have allegations against them in foreign countries.
According to Reuters, Thales was accused of agreeing to pay former South African President Jacob Zuma $ 34,000 annually for protection from an investigation into a $ 2 billion arms deal in 1999. The charges against Thales and Zuma were originally filed a decade ago but then set aside, for Zuma to successfully run for president in 2009. The trial would likely begin only in late 2020.
In 2011, the Paris Appeals Court ruled that Thales will have to pay a record fine of $ 920.2 million for bribes in the 1991 sale of frigates to Taiwan. The court confirmed that the fine must be paid to the Taiwanese State and the fine was the biggest ever in a French corruption case.
Further, in 2004 the World Bank’s Integrity Unit blacklisted Thales from any of the World Bank’s projects for one year because of its fraudulent practices in a $ 6.9 million contract for the supply and maintenance of motorcycles in Cambodia.
Meanwhile, Indra – the Spanish company, in 2017, was accused by civil society and Angolan opposition for undermining Angolan’s fragile democratic system and manipulating election results together with the Angolan Government.
Leonardo faced mounting pressure over bribery allegations as British authorities opened a criminal inquiry on the sale of helicopters to South Korea and India, in 2018.
The watchdog group, Corruption Watch, examined Leonardo’s allegedly corrupt international sales of helicopters and called on the Serious Fraud Office to launch a formal inquiry.
In July last year, the Defence Ministry of India suspended business with Leonardo on charges of corruption by the Central Bureau of Investigation (CBI) of India in a VVIP helicopter deal scam.
The Secretary to the Ministry of Tourism and Aviation S.M. Mohamed refused to comment on this, while all the attempts to reach Treasury Secretary S.R. Attygalle failed.

August 30, 2020 bythemorningeditor1 liberty No Comments
The economic data or statistics of a country usually reflects the true picture of that country whilst allowing international institutions to understand the country’s position in comparison with its re

September 6, 2020 bythemorningeditor1 liberty No Comments
Several of Sri Lanka's corporates have issued notices cancelling all their employees' annual leave for the year 2020 due to the three-month lockdown following the Covid-19 outbreak in the country, The