Last week, over a period of 48 hours, four districts received an incessant downpour which caused floods, affecting 112,845 persons, while in five districts, a total of 24,284 persons were affected by strong winds, owing to a storm sweeping across a section of the island.

While 44,375 persons were provided safety in 81 locations, seven persons had been injured and one death was reported owing to the adverse weather. 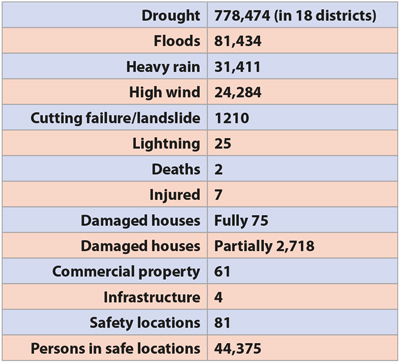 The Police Media Centre reported that Mohamed Johar Arshad Mansoor, a 20-year-old resident of Dematagoda, was hospitalised at the Colombo National Hospital on 24 September at about 4.40 p.m. after being rescued from the Kolonnawa Canal during the floods. The victim however died in hospital on 25 September.

Minister of Public Administration, Disaster Management, and Livestock Development Ranjith Madduma Bandara said the Government allocated a total sum of Rs. 43.1 million to the affected districts to address the emergency needs, out of which, Rs. 15.78 million is for house damage insurance payoff, Rs. 25.84 million for relief, and Rs. 1.5 million for disaster response.

Madduma Bandara also stated that long-term measures to relocate families from disaster-prone areas will be rolled out in the coming months.

“Our objective is to ensure proactive relief is provided to the people affected by natural disasters. We are also in the process of providing housing facilities for the families that get displaced due to landslides, and we look to relocate them to safer areas free from hazards,” he added.

Disaster Management Centre (DMC) Director General W.A. Dharmasiri, addressing the media, informed that the DMC is actively delivering updates about the imminent disaster situations to the public and that the public could always acquire further information and updates on the situation by calling their hotline 117.

The public was also requested to be vigilant about the possible early warning signs of landslide, following the heavy downpour in certain areas. National Building Research Organisation (NBRO) Senior Scientist Dr. Padmakumara Jayasinghe informed the public to watch out for sudden appearances of water springs, cracks on the floor/ground, trees tilting, and cracks appearing on walls.

“Even though the floods are receding, the public is requested to avoid getting into inundated areas unnecessarily to avoid contracting skin and respiratory diseases.

The Sunday Morning contacted the Epidemiology Unit of the Ministry of Health to seek advice on possible diseases that could occur owing to the adverse weather. The unit responded, saying: “It is a little too soon to speculate as to what types of diseases would be prevalent in the coming days. Based on the nature of the natural disasters experienced in five districts over the past few days, we have instructed the District Medical Officer of Health (MOH) to issue precautionary warnings to their respective areas.”

Since a larger number of victims faced floods and have been moved to safe locations until they are given clearance to move back to their homes, they would have to be vigilant over possible skin diseases, respiratory disease, and dengue. Therefore, the public is requested to take necessary measures to keep their environment clean.

Moreover, the National Dengue Control Unit is to launch a three-day special mosquito control programme from 3-5 October in multiple high-risk MOH areas around the country to enhance the prevention and control of dengue. The unit reported that a cumulative total of 48,495 cases of dengue have been reported since January this year, with 9,545 cases being reported in the month of August.

Department of Meteorology Director – Weather Forecasting and Decision Support A.R. Warnasooriya informed that a high possibility of showers or thunder showers in the evening or night over most parts of the island would occur today (29).

In need of radical changes

August 26, 2019 byThe Sunday Morning No Comments
There is no doubt about the crucial role education plays in shaping an individual’s personality and future.

May 27, 2019 bythemorninglk No Comments
China's footprint in Sri Lanka is set to expand with Chinese firms now being shortlisted for the proposed Light Rail Transit (LRT) project as well.