AG tells PCoI it has no jurisdiction over court cases 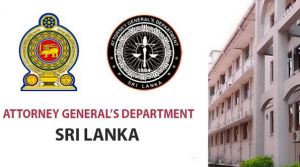 The Attorney General’s (AG) Department has informed the Presidential Commission of Inquiry (PCoI) probing political persecution, that the Commission had no jurisdiction over cases handled by the AG.

Dassanayake, Karannagoda and 12 others were charged with the abduction and disappearance of eleven youths in Colombo and its suburbs in 2008 and 2009.

The President had issued an Extraordinary Gazette notification on 9th January announcing the appointment of the Commission with immediate effect.

The three-member Presidential Commission will look into alleged political victimization of public servants during the period from January 8, 2015 to November 16, 2019.

May 21, 2020 byTSM Web Desk No Comments
The Police claimed that the law will be strictly enforced against persons who have been arrested for intentionally violating curfew regulations.

May 10, 2020 byTSM Web Desk No Comments
256 persons from the Mullaitivu quarantine centre have been released.