AIA Insurance recently brought down two leading coaches from the famous English Premier League club, Tottenham Hotspur, better known as Spurs, to Sri Lanka so as to conduct a football workshop in Colombo. 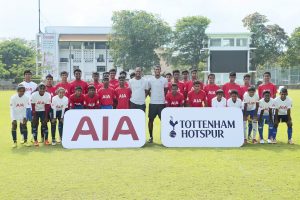 This elite coaching camp was conducted for 50 young and talented football enthusiasts from around the island, who had been chosen by the www.papare.com website, based on their performance during the Dialog Football National Tournament.

The camp was held in partnership with Thaabit Ahmed Football Academy (TAFA), which provided a group of assistant coaches as well as other necessary assistance for the workshop.

AIA Insurance is the official shirt partner of Tottenham Hotspur which enjoys a fan base of over millions of people across Asia. 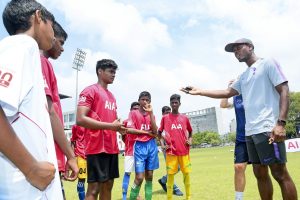 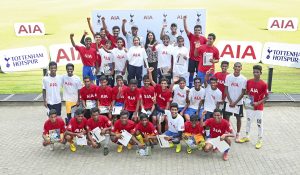 November 12, 2018 byRevatha No Comments
A special memento was presented to Herath, in felicitating him, by the PSJASL at the special prize distribution ceremony held post Test in Galle on Friday.