All is well with Sajith and TNA – Thalatha 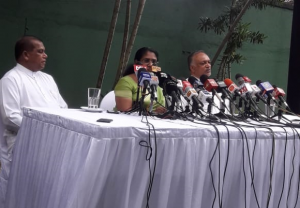 Atukorala’s statement came in response to a question posed with regard to TNA’s unfavourable response to yesterday’s Cabinet outcome.

Atukorala who was speaking at a press briefing  in Colombo today said the relationship with the TNA and Premadasa hadn’t deteriorated.

At the conclusion of yesterday’s special Cabinet meeting, TNA member MP M. A. Sumanthiran took to his twitter handle and said,“Disappointed with the “Yahapalanayas” who oppose the move to abolish EP. Selfishness and opportunism at its worst. Abandoning your promises and mandates got over quarter of a century? will support abolition at whatever time based on policy and not expediency.”

She said the government had ample time to abolish the Executive Presidency and that the act to bring up such proposal by the Prime Minister in the last hour was questionable.

She said the abolition of the Executive Presidency doesn’t need to be an election promise but a subsequent action.

“The proposal brought by Prime Minster Ranil Wickramasinghe at yesterday’s cabinet meeting was an untimely proposal”, she said.

Minister of Agriculture,Irrigation,Sports and Youth Affairs,  Ranjith Madduma Bandara speaking at the press briefing said this was the first time ever that a Cabinet meeting had taken up a private member proposal.

December 17, 2019 byTSM Web Desk No Comments
The U.S. Embassy in SriLanka has reminded US citizens to exercise caution when traveling during the holiday season.

June 2, 2019 bythemorninglk No Comments
The draft Cyber Security Bill, which will vastly change the digital landscape of Sri Lanka will be taken up by the Cabinet this week, The Sunday Morning learnt.