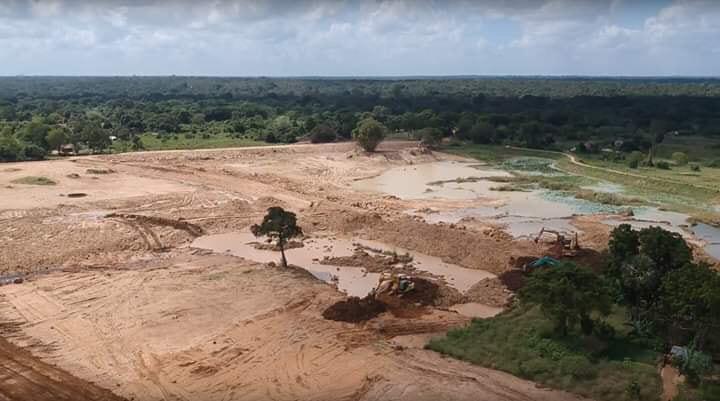 Residents of the Rajanganaya, Yaya 18 area in Anuradhapura recently raised concerns over land being allocated for an aloe vera plantation project. According to the residents, over 100 acres of land had been cleared and lots are being demarcated with interlock-paved roads.

The investor for this project has been recognised as Aura Lanka Herbals Managing Director (MD) Dr. Chandika Viranjith Thambugala and residents raised concerns that the private company owner, with the assistance of Minister of Environment and Wildlife Resources and Lands and Land Development S.M. Chandrasena is destroying the ecosystem in the area and trying to acquire state-owned land in the area through this project.

The Sunday Morning contacted Minister Chandrasena to ask why he was supporting this aloe vera plantation project. In response, Chandrasena stated: “This is a massive agricultural project that has come our way. In the initial stages of the project, Dr. Thambugala had faced many difficulties to launch the project and he had not received much support from the previous Government. Our Government understood the importance of this project. Therefore, I was able to assist him with re-launching it.”

Chandrasena also noted that after studying the project proposal, he realised that there was potential for the project to grow across 100,000 acres and that it would provide direct and indirect employment to at least 100,000 persons.

With most of the land situated around the proposed plantation site in Rajanganaya belonging to the Government, there are several plots which have permits for cultivation and some that do not. Furthermore, some of that land belongs to the Departments of Wildlife Conservation and Forest, and some of it is under local government institutions. Chandrasena informed The Sunday Morning that in order to support the aloe vera plantation project, he will take the necessary steps to handover suitable land plots to the villagers along with cultivation permits.

When asked about the outcry created by the environmental organisations indicating that this project is causing massive damage to the ecosystem as it is conducted adjacent to the border of Wilpattu National Park, the Minister responded: “It is in our nature to oppose any new development project that takes off. The public should not engage with such a school of thought. We need to understand that this project will not only assist the farming community in the area, but will also greatly benefit the country as aloe vera products have a huge market internationally. The President himself has instructed us to assist investors who are introducing projects that would uplift the livelihoods and the economy. Therefore, we will provide all the support that is needed by Dr. Thambugala.”

Aura Lanka Herbals MD Dr. Thambugala, speaking to The Sunday Morning about the project, informed us that he had obtained all the necessary approvals prior to commencing the project. “Currently, we are preparing the site to start the aloe vera nursery. Once the cultivations commence, we are looking at exporting aloe vera-based products to the European market. Therefore, even the cultivation needs to be done according to international standards. While many allege that we are destroying the forest land, we are actually using the farmlands around the area. These lands already have permits to cultivate any suitable crop.” 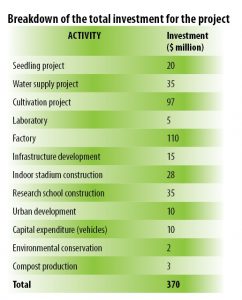 Dr. Thambugala explained that his company is investing in the nursery and once the plants are suitable to be introduced to a cultivation plot, they will distribute the aloe vera plants to the farmers who have agreed to be part of the project.

“Once the farmers start profiting from the cultivation, we will recover the cost incurred to grow the plants. While all these cultivation plots are adjacent to the border of Wilpattu National Park, I can assure that we have not destroyed any forest cover. The cultivation plots are already located in areas that were allocated by the Government for use by farmers in those areas,” Dr. Thambugala noted.

He also stated that over the past one-and-a-half years, the company had attempted to initiate the project, but they were faced with a lot of red tape. He further revealed that at present, the cleared area in the project site stands at about 66 acres and that he has done an Environmental Impact Assessment (EIA) for all the land plots within the site. 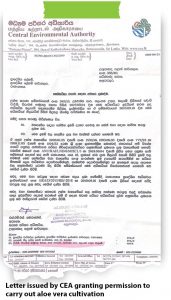 Meanwhile, upon reading the letter of permission that was issued by the CEA North Central Provincial office on 24 September 2019, signed by its Director S.M.S. Samarakoon, it stated that permission had been granted to carry out aloe vera cultivation in the proposed land plots as they were currently being used for chena cultivations and as personal garden spaces. The office had also observed that the selected land plots were not in a forest area.

Given these observations, the CEA North Central Provincial office indicated that according to the provisions of Extraordinary Gazettes No. 772/22 of 24 June 1993, No. 1104/22 of 5 November 1999, and No. 1533/16 of 25 January 2008, the said project did not need an environmental permit or environmental recommendation.

The letter further stated that the CEA had no objection to the project as long as the aloe vera cultivation was only carried out in the land plots belonging to Rajanganaya, Yaya 18 in the Grama Niladhari Division 456, and that the project should employ suitable soil conservation methods which should be carried out in an eco-friendly manner, abiding to the terms and conditions of the Department of Irrigation, Department of Agriculture, and other relevant authorities.

However, should the company require the construction of a factory and implementation of postharvest technology to process the yield, approval should be obtained from the CEA.

For our reference, Dr. Thambugala had also shared the agreement he had drawn up between Aura Lanka Herbals and the farmers who wished to register their cultivation plots for the aloe vera project. A close look at the documents revealed that each farmer had separately requested permission from the Divisional Secretariat in Rajanganaya to use heavy machinery in order to prepare the land for cultivation and land development purposes. 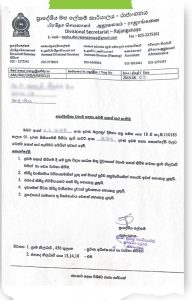 On Friday (28), Protect Sri Lanka Organisation Founder Pahiyangala Ananda Sagara Thera visited the site in Rajanganaya, Yaya 18 to inspect the area and had met with the team in charge of the project and its owner as well.

“Upon my visit, I observed that a large land area had been cleared to construct a reservoir and dam. In addition to that, a larger area has been cleared within the buffer zone of the Wilpattu National Park as well.

“I can assure you that this project has not taken the necessary permission or received clearance from the Forest Department, Department of Wildlife Conservation, and Ministry of Environment and Natural Resources to commence work.”

Furthermore, Pahiyangala Ananda Sagara Thera debunked the speculations that were shared on social media platforms stating that the Wilpattu National Park is being cleared to cultivate aloe vera, construct an indoor stadium, and build a reservoir.

“There is no construction work taking place inside the national park. However, there is a huge area of land cleared using heavy machinery within the buffer zone, for which no clearance was obtained. I have no objection over the continuity of this project, therefore I have requested the project owner to obtain the relevant EIA, prior to continuing the work.”

*The Sunday Morning is in possession of the electronic copies of the letters of approval and some of the agreements that were signed between Aura Lanka Herbals and the farmers.

February 10, 2019 bythemorninglk No Comments
Controversy surrounds the "presidential pardon" granted to 500 inmates. Of the pardoned prisoners only 518 were freed, another 27 remain in remand till further notice.

December 13, 2020 bySarah Hannan No Comments
Unrest continues to develop in areas that have been placed under isolation for the sixth week, especially where people reside in flats built for low-income families located in the middle of the commer