Animals and humans at risk 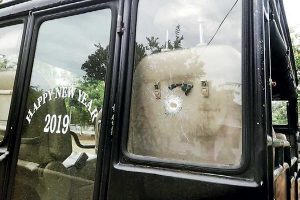 A recent shootout at the Udawalawe National Park has left the public concerned not only for the lives of innocent animals within the sanctuary but also the safety of tourists and visitors.

A French family was caught up in the shootout at the park when their jeep met with a group of illegal hunters at the “Maw Ara” area of the park.

The French family of three including a 12-year-old boy came under attack when they were attempting to photograph the poachers. The family and the rangers who attempted to arrest them escaped unscathed and the suspects remain in custody. However, the safari jeep was damaged in the incident.

The Department of Wildlife Conservation (DWC) said the culprits were charged with violating the Flora and Fauna Ordinance and remain in custody.

Speaking to The Sunday Morning, DWC Director General Chandana Sooriyabandara stated that the DWC was trying to gain political help to combat the issue.

“We’re employing an additional 250 park rangers starting next month to increase the security of the animals and visitors of all the conservation parks around the area,” stated Sooriyabandara.

He also stated that the Department was further responsible for ensuring the chosen people were suitable to carry out the responsibilities of the job.

“Poachers mostly hunt spotted deer and wild boars in these areas,” he said.

He further said that the meat was sold but the poachers normally did not harm animals such as elephants.

The International Union for Conservation of Nature (IUCN) Asian Elephant Specialist Group (AsECG), in an article titled “The Asian Elephants”, noted: “Sri Lanka has the second highest number of elephants in Asia, largely confined to the lowlands in the Dry Zone and fairly widespread in northern, southern, eastern, northwestern, north central, and southeastern Sri Lanka. A small remnant population is present in the Peak Wilderness area and the Sinharaja area of the Wet Zone of the country.”

The DWC stated that manpower had been distributed between tourism, law enforcement, construction, and management, and further manpower was being allocated to resolve the human-elephant conflict (HEC).

According to the DWC, the area where the highest amount of poaching happens which requires maximum protection cannot be specified.

“Illegal hunting happens all around the island. Therefore, we cannot obtain statistics. It is a growing issue and we are still studying how we can combat this without aggravating the situation any further,” the DWC stated.

The DWC also stated that it transferred the officials who were present at the time the crimes took place due to their negligence, irresponsibility, and inability to prevent such a situation.

However, according to senior environmental lawyer Jagath Gunawardena, the Department currently employed 800-900 individuals for security purposes all over the island, which was not sufficient to cover such a large area of forests.

“We need five times the manpower we possess now to make sure our forests are safe and no illegal activities are taking place within them. It is humanly impossible to cover such a large landmass with a limited number of employees,” he said.

The Udawalawe National Park is renowned for its biodiversity and for hosting an animal habitat to protect the catchment area of the reservoir.

Around 12% of Sri Lanka’s total landmass is covered with forests.

Gunawardena stated that the Udawalawe National Park is significant for its biodiversity and holds the potential for enhancing tourism growth.

In February 2019, five Slovakians were convicted for species hunting and the Slovakian Government paid a fine of Rs. 10.85 million to bail them out.

The five foreigners used advanced technology and nets sprayed with pheromones – a chemical substance produced and released into the environment by an animal, especially a mammal or an insect, affecting the behaviour or physiology of others of its species – to catch endemic moths.

In addition to poaching, Sri Lanka also faces the threat of biopiracy as well.

A term originally coined by the Action Group on Erosion, Technology, and Concentration, the term refers to “the appropriation of the knowledge and genetic resources of farming and indigenous communities by individuals or institutions that seek exclusive monopoly control (patents or intellectual property) over these resources and knowledge”.

To combat this issue, the DWC stated that it has started conducting raids and has employed specialists to investigate the matter.

“Poaching increases mainly in the drought seasons. This is very dangerous. Coupled with the scarcity of water and the humid weather, poaching and biopiracy can affect species population,” they said.

January 5, 2020 bySarah Hannan No Comments
Influenza is prevalent throughout the year, with the two peak times recognised to be from May to July and November to January. The viral infection is transmitted from human to human by droplets.