Anoma Wijewardene is just one of those female artists – there’s unarguably only a very few of them who are persistent, competent, and passionate about what they do. The creation “Anoma”, the monograph encompassing 50 years of work by the renowned artist extraordinaire, first launched at the iconic Central Saint Martins – University of Arts London on International Women’s Day. The debut launch of the monograph took place on 9 September at the Shangri-La Colombo amidst a distinguished gathering.

Addressing her gathering about the monograph that evening, Wijewardene said: “It is a lifetime of work, but it is now more relevant than ever before.” 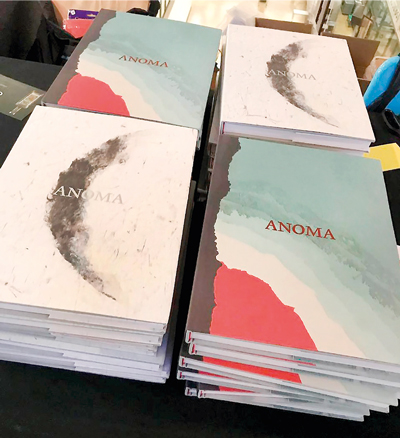 In recognition of her work spanning nearly five years, Anoma was partnered with the “Oxbridge” of arts, Central Saint Martins at the monograph’s London launch. She’s truly awe-inspiring , for she remains one of the only Sri Lankan artists to have been invited to showcase her art on the cover of British Vogue 1974 and more recently, at the European Cultural Council during the 58th Venice Biennale 2019, often termed the “Olympics” of art. It was only nearly 70 years ago that the ’43 group included personalities such as George Keyt, Justine Deraniyagala, Ivan Pieris, and George Claessen.

The monograph itself, which was seven years in the making, amasses nearly 200 images, including the documentation of images from her sketchbooks, collectors’ details, a biography, and a chronology. In addition to this, the creation encompasses essays and other contributions from renowned writers; Richar Simon, its editor, Emeritus Prof. Gananath Obeysekere, the gallerist Jana Manuelpillai of the Noble Sage Collection London, Rosalyn d’Mello from New Delhi, and former Head of Central Saint Martins – University of Arts London Emeritus Prof. Jane Rapley include those who have penned essays.

That evening, Wijewardene indicated that part of the proceeds of the sales will go towards supporting and mentoring women who hope to expand a career in art. An exhibit by the first woman to have benefited through the initiative last weekend marks the informal commencement of this venture. This further stabilises her next focus involving the extension of support to women in art through a foundation.

September 30, 2019 byThe Sunday Morning No Comments
When it comes to the organisms of Earth, we humans, believing ourselves to be the superior species, have identified specific methods of classifying ourselves and all other species that exist now

You simply MUST drop by!

July 23, 2019 bythemorninglk No Comments
Café Hideout is a cosy little café situated on No. 24, Fife Road, Colombo 5. The location is a familiar one to many of us as it is where the once famous Hansa Café used to be.