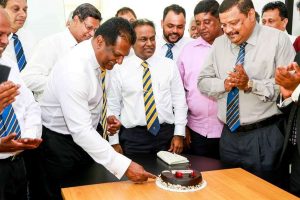 Will there be an interim committee appointed soon to handle Sri Lanka cricket? Here is Shammi Silva of the Sumathipala camp celebrating their election victory last February

What can he do to overhaul the staggering situation if the Lankan team returns home sooner from England this time, continuing their appalling form particularly in the shorter formats in the last four, five years?

Can it be done? An official close to SLC told ‘The Sunday Morning’ that the Sports Minister can actually do so citing the poor performance of the present SLC committee, headed by Shammi Silva, especially in their financial front.

“That the SLC has not presented so far its audited accounts which are due on 30 May is a more-than-enough reason to dissolve the present committee and appoint an interim administration,” the said official explained.

“There is also another allegation that the SLC has fraudulently transferred its money to an overseas account, on which there is an investigation going on at the moment. The ICC will not interfere if an elected committee is dissolved for legitimate reasons.”

He also pointed out that it was obvious the game began to have a downward trend after Sumathipala and co took over SLC, when the Yahapalana Government came into power in January 2015. Sumathipala held SLC presidency from 2016-18 after Sidath Wettimuny headed an interim administration for nearly ten months, from April 2015 to January 2016. In January 2016 when elections returned to SLC, Sumathipala beat Nishantha Ranatunga of the rival faction to 88-56 votes for the post of presidency. The Sumathipala-backed Shammi Silva won the race for presidency to 83-56 votes over Jayantha Dharmadasa in last February’s AGM.

The political higher-ups then shrewdly obstructed Sumathipala entering into SLC yet kept him within their government ranks, as an MP. After the present govt. came into power in 2015, Sumathipala was appointed a Deputy Minister and then the Deputy Speaker, a post he held from Sep. 2015 to April 2018.

For their credit, under the pre 2015 SLC administration, the Sri Lanka national team continued to perform well across all three formats. Through those ten years (2005-2014) they had been placed among top three in the ICC country rankings while becoming runners-up in both the ICC 50-over World Cups; in 2007 and 2011. In the meantime, they reached the finals of the ICC T20 World Cup too thrice, out of five tournaments held during that period (in 2009, 2012, and 2014) winning the title in 2014. That meant Sri Lanka reached finals five times in seven World Cups staged during 2005-2014.

“Elections to SLC are overtly looking democratic and the interims look undemocratic as well as bureaucratic. But in reality, especially in the present local club-cricket context, this reality turns upside down. The moment elections are held, money starts to rule everything. What we see today is the unavoidable outcome of that bitter reality,” he added.

Reasons for the downfall

“You see they doubled the number of premier clubs, from eight or ten to twenty, mainly to have an advantage in the elections. At what cost is the problem. Even (Kumar) Sangakkara raised that point in the ongoing World Cup TV commentaries as a main reason for the present downfall of our cricket. When money dictates terms on a nationally significant institution, there will always be problems. They removed good coaches in the system. See they played over fifty players in the national team within a mere two, three years! Match-fixing grew like never before. Skippers and coaches changed overnight.

“Finally they thought every flow of theirs that cropped up in the playing field could be reversed by hiring Chandika Hathurusingha for a mammoth sum. So they gave him an incredible control over everything. As a result the balance in the system that controlled the national team went out of the window. Chandika failed to deliver. Now we’ve faced the inevitable. We are struggling, in reality, even against teams like Bangladesh and Afghanistan. We’re no longer a force in the world stage now. Now we’re just an unpredictable side that has tragically gone off colour.”

What’s to be done?

He elaborated there should be short and long-term plan to overhaul the negative trend.

“First there ought to be a sound funding model that could suffice all the decisive stakeholders of the game. We need to fund the right areas, not with an intention to prolong the control over your voters. The national Under-19, the Emerging and the Sri Lanka sides need good a coaching setup. The premier club system has to be remodelled.”

Further, he emphasised the need for a proper and unbiased selection process too.

“I can’t figure out how a player like Dinesh Chandimal has been kept out from this World Cup. Why such a confident player like Avishka (Fernando) was kept out of the playing XI in the first few games? If sanity and sensibility return, we can again be up there in the world rankings. We have the firepower for that. But the system needs to be changed soon.”

December 31, 2019 byRevatha No Comments
Chilaw Marians Cricket Club became the Champions of the SLC Invitation Limited Over Tournament by beating NCC at the finals

September 19, 2018 byRevatha No Comments
Sri Lanka future prospects, their U-19 side, named for the September 27 Asiad, to begin in Bangladesh.