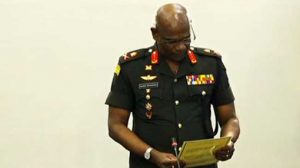 Army Commander LT Gen Mahesh Senanayake testifying today before the Parliamentary Select Committee probing the Easter Sunday attack said that there was mistrust between the Army and the Terrorism Investigations Division (TID).

Committee member Parliamentarian Dr Nalinda Jayatissa questioned the Army Commander on a testimonial made by former Defense Secretar, Hemasiri Fernando, to the effect that there was mistrust between the Army and the State Intelligence Service.

The Army Commander responded that this was not so and that it was with the TID that the Army had a lack of faith in.

“Only I know that he (Fernando) had made such a statement in his testimony. That was not about the SIS. The problem was with the Terrorist Investigation Division. The mistrust I mentioned to him (Fernando) was not with the SIS but with the TID.

When Pro-tem chair of the Committee, MP Dr Jayampathy Wickremeratne, asked to elaborate further on the matter, the Army Commander said that the mistrust between the Army and the TID go back as far as the conclusion of the war.

February 5, 2020 byTSM Web Desk No Comments
UNP Parliamentarian Ranjith Madduma Bandara's new post as the  the General Secretary of the UNP-led alliance has been finalized by the UNF parliamentary group which convened today (5).