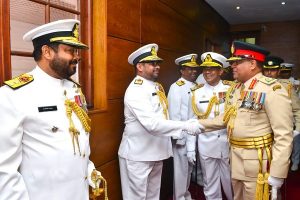 Silva assured that in his capacity as the Army Chief would do everything possible to further foster close relations and strong connectivity with the Navy as well as the Air Force during his tenure since all three professional organizations are working for a common goal.

“We will work together as combined forces and sustain good practices both organizations harbour to reach a common goal in order to protect national security interests and the people of this country. Professionally-sound tri-services have mature and well-experienced Senior Officers, now serving as top level Commanders in all three services, who have been known to one another since the times of their Cadetship and participation in the battlefield. Let us closely interact with all our actions and reciprocal moves for the common good of our services as never before,” the visiting Commander of the Army told his host.

“We all stood together during the critical times of our history and the support given by our Other Ranks in all three forces could not be belittled and it was the unity that freed this country from grips of terrorism. Let me profusely thank the Navy for its unstinted support so far given and being still extended to the Army all the time protecting our shores,” the visiting Army Chief quipped.

Lieutenant General Silva also made a special mention of very effective Naval operations being conducted by sailors round the country in their quest to detect narcotics and other harmful elements, trying to enter the country. He also pledged the Army support for such operations in future and invited the Navy to join hands with the Army for such projects too.

The visiting Army Chief also spoke high of the Navy’s contribution to all types of natural disasters and national catastrophes and invited a representative team of senior Navy Officers to attend the forthcoming Army drill competition awarding ceremony as special guests showing their spirits of brotherhood and strong connectivity.

Towards the end of the interactive discussion, both of them exchanged mementos as symbols of goodwill and understanding. The visiting Army Chief also left a few thoughts in the Visitors’ Book at the Navy Commander’s office and sat for a group photo before he left the premises.

December 29, 2019 bythemorninglk No Comments
The Election Commission (EC) is short of funds to pay state officials who engaged in election duties at the last presidential election, The Sunday Morning learnt.