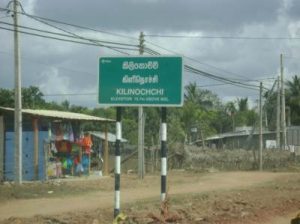 Commander of the Army, Lieutenant General Shavendra Silva today released 150.15 acres of land in Kilinochchi belonging to the State and private owners.

The Army said the release was done in line with the Presidential Secretariat’s policy of releasing military acquired land in the North and East.

According to the Army the release of the mentioned land has not compromised national security interests.

Accordingly, documents, related to 139.56 acres of state land and 10.59 acres of private land, being used by 57 Division and 3 Gajaba Regiment troops in Kilinagar Grama Seva sector of the Karachchi Divisional Secretariat and in Ampakamam Grama Seva sector in the Oddusuddan Divisional Secretariat area were formally handed over by the Army Commander to Kilinochchi District Secretary S Arumainayaham, and Mullaittivu District Secretary R Ketheeswaran, during a ceremony held in the morning at the Security Force Headquarters – Kilinochchi (SFHQ-KLN).

“We are here to protect people and the country at large and do not want to sabotage fast growing moves of reconciliation and bonds of goodwill and friendship as one nation. Troops are always prepared to lend assistance to communities  and would come forward particularly when they are in trouble. We also have undertaken massive community-oriented projects of multi-purpose nature,” the Commander remarked during the occasion.

April 14, 2020 byTSM Web Desk No Comments
Some 1.92 million people around the world have now been confirmed to have the new coronavirus, according to data compiled by Johns Hopkins University.