The Ministry of Environment has sought the assistance of the Sri Lanka Army to set up a special environment protection and monitoring unit which can launch investigations, The Sunday Morning learnt.

Speaking to The Sunday Morning, Minister of Environment Mahinda Amaraweera said that the unit will be empowered to launch investigations over the environmental destruction that is taking place, regardless of the jurisdiction it belongs to. The unit will specially focus on the illegal sand mining incidents that have been rampant in the country. 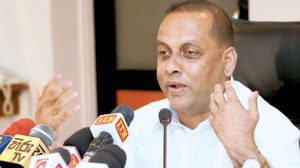 “For the moment, they will be able to investigate the incidents and immediately deploy teams to the site of destruction. With the Environment Act amendments that will come into place in the next few weeks, these teams will be given the legal authority to take necessary action against the perpetrators as well,” the Minister added.

Accordingly, the public is requested to get in touch with the Ministry of Environment – 1991, Central Environmental Authority – 1981, Geological Survey and Mines Bureau – 1921, or to contact the Minister himself on 0707555666 by sending a WhatsApp message, text message, or video.

The Minister further emphasised that a request has been made to the Attorney General to amend the Environmental Act expeditiously to increase the existing penalties and fines for those who cause harm to the environment.

Over 400 Sri Lankans repatriated from the UAE and Qatar

September 14, 2020 bythemorningeditor1 liberty No Comments
More groups of Sri Lankans who were stranded in foreign countries, owing to the outbreak of the Covid-19 pandemic, have returned to the island.

September 8, 2019 byThe Sunday Morning No Comments
With less than two weeks for the Election Commission (EC) to receive the power to announce the presidential election due to be held towards the end of the year, the country’s political parties