Asha de Vos on the pandemic, her most recent award, and building an army

November 8, 2020 by Jennifer Anandanayagam No Comments

“We witnessed the possibility of change”

The Covid-19 pandemic, as most would likely agree, is going to change a lot of things for us. On one side of the coin, there’s fear and anger that life as we knew it might never return, and on the other side, there’s revelation upon revelation into the inner workings of our own minds and that of others. Self-reflection, they say, helps us see the world clearer. 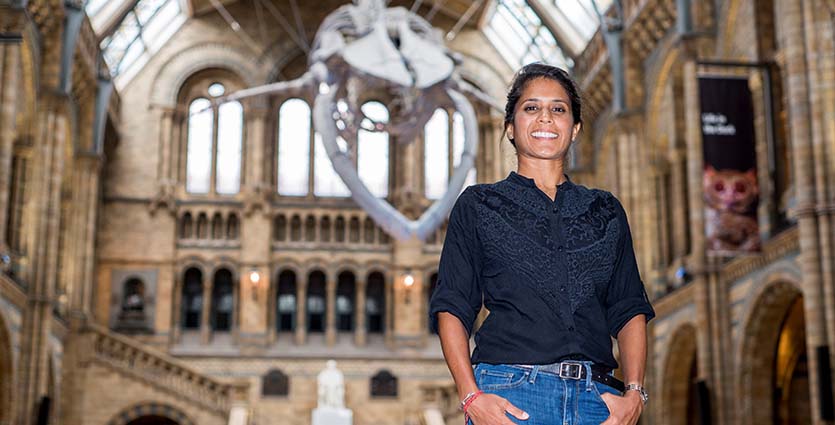 Is it self-reflection, then, that we need to better treat nature and all of its inhabitants – humans and animals alike?

Sri Lankan marine biologist and Oceanswell Founder Asha de Vos, who was most recently awarded the 2020 Maxwell/Hanrahan Award in Field Biology, feels that with the beginning of this pandemic and the first lockdown, we witnessed the possibility of change. “The oceans got quieter, and there were turtles hatching on beaches which had not been seen in a long time.”

But this is just a small victory in the grand scheme of things.

The little celebrations reported around the world, of nature healing itself, according to de Vos, are tiny illustrations of how life could be for us, if we continued to choose to reduce our impact as humans, reduce our footprint, and reduce our interactions in spaces; allowing nature to really flourish the way it should.

“Because, in the end, we’re in this situation because we were careless with nature, and the only thing that can get us out is to understand how we can co-exist with nature and go into the future in a much more respectful way.” Realising that we are a “cog in a larger wheel as opposed to a totally different entity” can propel us toward this change, she shared.

De Vos joins four others – namely biological oceanographer Colleen Durkin, population biologist Alejandro Pietrek, marine ecologist and conservation biologist Douglas Rasher, and scientist Mrinalini Watsa in her most recent recognition. Launched in 2020, the Maxwell/Hanrahan Award in Field Biology provides scientists with funding, attention, and support at critical junctures in their careers so they can focus on mastery and creativity, elevate unique perspectives to problem-solving, including from those who may be traditionally under-represented, and promote progress in the biological sciences.

The Maxwell/Hanrahan Foundation, started by Delle Maxwell and Pat Hanrahan in 2018, invited a group of respected and networked individuals to confidentially nominate scientists with a set of criteria in mind, some of which include potential for impact in the field, excellent research competence in biological fieldwork, originality, collaborative mindset, and communication skills.

It’s not a finish line

Speaking to The Sunday Morning Brunch right after the news broke on 30 October (last Friday), de Vos shared that her work is “a long marathon”, adding that recognitions such as these not only fuel her drive to keep going but also reinforce the feeling that she’s doing something right and that it is making a difference.

“It’s not a finish line, it never will be…because these journeys are long, especially in conservation.

“With the kind of work I do (conservation), we need to build our army and if we can’t build our army, we’re not going to be successful,” she said, adding that this award and the reaction it garnered from people who are celebrating it makes a big difference. “I feel the love and support I’ve got through my journey and this recognition is also my way of saying thank you to everyone who’s put their faith in me.”

Being away from the water

Unfortunately for de Vos, the pandemic and resulting quarantine curfews have kept her away from the very space she adores – the oceans.

“Sometimes it can be frustrating, for people like me who spend time out on the water, really interacting in the spaces that our species exist in, and trying to understand how to solve problems and drive change,” de Vos said candidly. She was quick to add, however, that even with the frustration comes a sense of understanding.

“From what I see, from early on with this pandemic, we had to pivot what we were doing,” she continued, adding that the goal continued to be the same – she and others like her, want people to fall in love with the ocean. “We want to provide training opportunities but how we provided that shifted. Times have changed but we will still have the opportunities we had in the past to go out and do the wonderful work we had providence to do. It’s all about pivoting and adaptation at this point. Nothing has stopped.”

De Vos was, however, on the scene of the recent mass beaching which is now being called Sri Lanka’s biggest beaching, when a large school of short-finned pilot whales came ashore in Panadura on the afternoon of 2 November. She, along with concerned citizens and authorities, were a part of a rescue mission to guide these whales back to sea.

Time away from the water has also brought about new opportunities for de Vos and her team, online talks catering to younger audiences being one such avenue. “Our work has grown in this time actually and we’ve taken on a lot of different things. We’ve created incredible networks of humans who believe in what we believe in and want to drive change. We did some really amazing things by bringing in marine conservationists from around the world and we provided access to live chats, so that more of our audiences could see what the possibilities are, who else is out there, and what the world looks like in this field. We want to create opportunities for people to engage. The doors have always been closed for people like Sri Lankans, and I want to open those.”

De Vos has also been working on new data which they’ve collected as a result of their most recent project assessing the impact of Covid-19 on small-scale fisherfolk in Sri Lanka.

“They are really vulnerable, daily-wage workers and we didn’t see much work being done around understanding what their needs are and how this situation has impacted them.” De Vos, with her access to an extensive network of students across the coastline, managed to successfully survey the lives and challenges of this vulnerable group. “We managed to do 415 surveys in one month and we’re in the process of analysing that data right now.”

De Vos hopes that when the findings of this analysis are presented to government officials, they are able to understand how we can be better prepared for instances like these.

A new army waiting to take over

When de Vos started out in the field of marine biology as an 18 year-old, Sri Lankans looked at her and told her there was no scope for it in this country. “I thought it was the strangest thing to say given that we are a tropical island.”

Amidst doubts and comments saying she’ll never come back if she left the country to pursue the field, de Vos said she never wavered on her dedication to her motherland. “My commitment is to my country.”

Times have certainly changed from when de Vos was an eager teen on the brink of carving out a niche path for herself in this industry. Today, she noted, she gets requests from more people than ever before asking her for advice on how to get into the field of marine biology, and from some who’ve even embarked on their educational career to support this dream. “We have people as young as five and six engaging with us. There’s an incredible shift in mindset.”

De Vos is sure that when her time comes to loosen the reigns, there’s a new generation that’s just waiting to take over and run with it.

“My goal is to get everyone involved, retire, and then watch the world become a magical place.”

August 9, 2020 byNaveed Rozais No Comments
Focusing on youth empowerment and youth policy in the wake of the new administration

June 3, 2020 byJennifer Anandanayagam No Comments
The Bathiya and Santhush (BnS) drive-in concert was held on 30 May and 1 June at the Ratmalana Airport. The show featured guest stars Umaria, Wasthi, and Yohani backed by Infinity.