The 14th edition of the Asia Cup cricket tournament will begin in Dubai on Saturday, 15 September with the participation of six countries; Afghanistan, Bangladesh, India, Pakistan and Sri Lanka, all ICC Full Members, and Hong Kong, the 2018 Asia Cup Qualifier. 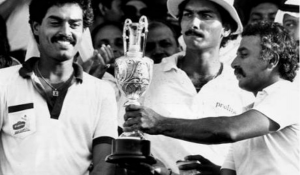 On April 13, 1984, India skipper Sunil Gavaskar (on right) receives the first-ever Asia Cup at Sharjah Cricket Ground. The Asia Cup was sponsored by Rothmans. On left is Dilip Vengsarkar and in the centre is Ravi Shastri. India won the tournament held on the round-robin basis and Sri Lanka, who beat Pakistan, became runner-up.

* It was first announced in 1983 when the ACC was founded as a measure to promote goodwill between the Asian cricket playing countries.

* The inaugural Asia Cup was held in 1984 as ‘Rothmans Asia Cup’, in Sharjah, United Arab Emirates, the location of the newly formed ACC until 1995. It was held from 6 to 13 April 1984. India, Pakistan and Sri Lanka participated. It was held in the round-robin format (each team played the other once). India won both its matches, winning the inaugural Cup. Sri Lanka came in second beating Pakistan while Pakistan lost both their matches.

* It was originally scheduled to be held every two years.

* India boycotted the 1986 tournament due to strained cricketing relations with Sri Lanka.

* Pakistan boycotted the 1990–91 tournament due to political tensions with India.

* Again in 1993, the tournament was cancelled due to strained political relations between India and Pakistan. 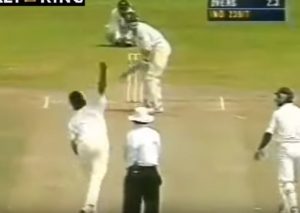 Asia Cup 1997: Marvan Atapattu batting. He made an unbeaten 84 runs to carry Sri Lanka to their second Asia Cup title, over India in the final, at R. Premadasa on 26 July 1997.

* The ACC announced that the tournament will be held biennially from 2008 onwards.

* In 2015, it was announced by the ICC that Asia Cup from 2016 would be played on a rotation basis, between ODI and T20I format, on the basis of the particular format of the upcoming world events; ICC 50-over World Cup and ICC World T20.

* As a result, the 2016 event was the first event played in the T20I format and functioned as a preparatory tournament ahead of the 2016 ICC World Twenty20.

* India and Sri Lanka are the most successful teams in the ODI format of the tournament having won the Cup five times each.

* India, therefore, is the most successful team in the tournament having won it 6 times (5 times in ODI format and once in the T20 format).

* The Asia Cup highlights an array of Asian cricketing stars and legends across three decades (1984-2018); to be precise, through 34 years.

November 14, 2018 byRevatha No Comments
Half-centuries from Jos Buttler and Sam Curran swept England towards a competitive total on the first day of the second Test in Pallekele.