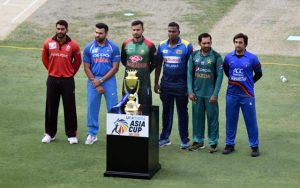 The cricket world seems to be getting used to the ‘new normal’. India said this week that they will tour here in Sri Lanka in June next year for three ODIs and five T20Is after the completion of the 14th Indian Premier League (IPL), to be held from March to May 2021. But the hotter news for the local fans is that India will stay on to play the Asia Cup, now scheduled to be staged in Sri Lanka next June and July.

The T20 tournament organised by the Asian Cricket Council (ACC) was set to be held in Sri Lanka mid this year but was postponed due to the surging pandemic. Next year, three months after the Asia Cup, the International Cricket Council’s (ICC) T20 World Cup is to be held in India in October and November.

Also during the same June-July window, Sri Lanka are to make a short tour of England for three ODIs. According to the England international schedule which was out this week, the three games are to be held at Durham on 29 June, The Oval on 1 July, and at Bristol on 4 July.

Pakistan catch up with Sri Lanka in points table

December 23, 2019 byTSM Web Desk No Comments
Pakistan have grabbed 60 points for their victory over Sri Lanka in the Karachi Test to move to 80 points in the ICC World Test Championship points table at the end of the two-match series.