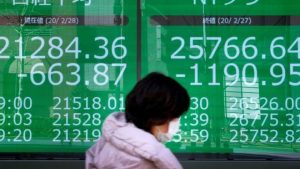 Global shares took a battering on Monday as they reacted badly to the threat of an oil price war breaking out.

Japan’s benchmark Nikkei 225 index dropped more than 3% at the start of Asian trading on Tuesday morning.

Having fallen 5% on Monday, Japanese shares have hit their lowest level since April 2017.

In Hong Kong, the main Hang Seng market moved up 1% but soon lost its gains, echoing the nervous sentiment among investors. The index fell more than 4% on Monday.

The market meltdown was sparked by a fallout between major oil exporters Russia and Saudi Arabia who are locked in a dispute over output levels.

Russia shocked oil markets by leaving a pact with oil-exporting group Opec, leading to a 30% plunge down to around $31 a barrel.

Flexing its muscles, Russia’s finance ministry said the country could withstand low oil prices for as long as a decade.

The sharp drop in oil prices unsettled investors already reeling from a global economic slowdown caused by quarantine measures to fight the spread of the coronavirus.

Major central banks have pledged to pump cash into the financial system while governments are mulling stimulus measures to tackle the economic hit. These include cuts to interest rates to encourage companies to borrow money and expand.

“I don’t think that a cut in interest rates now is actually going to do a great deal to help the situation, it maybe a sign of reassurance but it is not more than that,” former Bank of England governor Mervyn King told the BBC. “What is needed now are targeted to help business deal with a short term crisis and collapse of their cash flow”

Reflecting jittery markets, gold prices crossed $1,700 per ounce on Monday, the highest since December 2012. Gold is often seen as a safe-haven asset in times of economic and political uncertainty along with government bonds. BBC

April 9, 2019 byRandev No Comments
US President Donald Trump has reportedly fired the director of the US Secret Service.