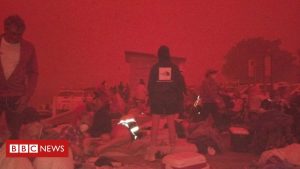 Thousands of people have fled into the water at a beachside town in Australia to seek shelter from a massive bushfire bearing down on the area.

Residents said the blaze moved into the Victorian town of Mallacoota on Tuesday morning, throwing embers towards homes.

Online, people reported the “roar” of the fire and posted pictures of a black and then deep-red sky.

Several popular holiday spots along the coast between Sydney and Melbourne are currently under threat from bushfires.

The most serious “emergency-level” blazes span a 500km (310 miles) stretch from Batemans Bay in New South Wales (NSW) to Bairnsdale in Victoria.

Residents in several NSW beachside communities, including Bermagui and Batemans Bay, have also been evacuated to the water.

Authorities had told people in these regions – many of them tourists – to stay put because it was too late and dangerous to evacuate.

The major road in the region – the Princes Highway – has been closed off.

“We do have real fears for their safety. They’ve been in active fire environments and we can’t account for them,” he told reporters on Tuesday. BBC

August 13, 2019 byTSM Web Desk No Comments
Hong Kong leader Carrie Lam has warned anti-government protesters not to push the city into an "abyss", in an emotional press conference on Tuesday.