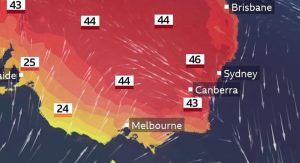 Australian Prime Minister Scott Morrison has announced 3,000 troops will be deployed to help tackle raging bushfires across the country.

Defence Minister Linda Reynolds said this is the first time this has happened in Australia’s history.

Temperatures are expected to soar above 40C (104F) in parts of south-east Australia on Saturday. Officials warned that it is set to be a “dangerous day”.

Since September, fires in Australia have killed at least 23 people.

Speaking at a press conference on Saturday, Mr Morrison told reporters: “We have seen this disaster escalate to an entirely new level.”

Dozens of people are missing and some 1,500 homes have already been lost this fire season.

Authorities in south-east Australia are bracing for a weekend of high temperatures and strong winds, which are threatening to worsen bushfire conditions across the country. BBC

Facebook ‘to be fined $5bn over Cambridge Analytica scandal’

July 13, 2019 byRandev No Comments
US regulators have approved a record $5bn (£4bn) fine on Facebook to settle an investigation into data privacy violations, reports in US media say.

June 21, 2020 byTSM Web Desk No Comments
This is the first response from anyone in the government on casualties on the Chinese side in the clash