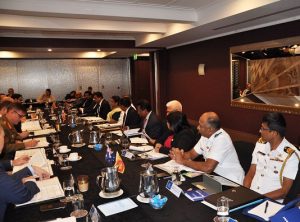 Australia has urged Sri Lanka to maintain the momentum with regard to combating human smuggling activities.

During the meeting Acting Deputy Secretary, Policy Group, Department of Home Affairs, Australia Hamish Hansford reiterated both sides should be in constant engagement in areas of necessary cooperation including human smuggling.

Addressing the meeting the High Commissioner of Sri Lanka in Canberra J. C. Weliamuna, highlighted the importance of the continuation of the JWG as the principal forum to address people smuggling and human trafficking issues.

He further stressed that the dialogue between Sri Lanka and Australia is a viable platform to share knowledge and experiences including best practices and views in addressing the scourge of people smuggling and transnational crime ventures.

Secretary Ministry of Defence, Sri Lanka General S.H.S. Kottegoda said Sri Lanka considers the JWG as an important platform where both parties have been able to resolve many issues of concern with regard to people smuggling and transnational crimes.

He stated that Sri Lanka and Australia have come a long way and commended the Government of Australia for the assistance extended to Sri Lanka in many areas inclusive of legislative and law enforcement, intelligence gathering, vessels monitoring and sharing of information in concerned areas.

He further stressed that while continuing the discussion on strengthening the relationship with regard to countering people smuggling, it is time to consider a stronger security framework to counter terrorism and prevent violent extremism.

He further suggested that intelligence cooperation and information sharing are priority areas to advance common security objectives providing transparency and building confidence in the Indian Ocean.

The deliberations between the two parties concluded successfully and a Memorandum of Understanding(MoU) on Return and Readmission of Persons is scheduled to be signed between the two countries in the near future.

Sri Lanka has also communicated its readiness to host the Seventh JWG in Colombo in 2020.

January 31, 2020 byTSM Web Desk No Comments
The new coronavirus has been declared a global emergency by the World Health Organization, as the outbreak continues to spread outside China.

December 25, 2018 byThe Sunday Morning No Comments
Eleven Police teams, including the Colombo Crimes Division (CCD) have been deployed to investigate the shooting incident at the Kudawella fisheries harbor in Tangalle