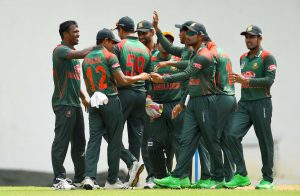 Batting first, the hosts posted 282 for the loss of eight wickets in their allotted 50 overs. Dasun Shanaka top-scored with an unbeaten 86 in 63 balls while Shehan Jayasuriya played a support role with a half-century (56). Bhanuka Rajapaksa chipped in with 32.

In bowling, Soumya Sarkar and Rubel Hossain captured two wickets each for Bangladesh for 29 and 31 runs respectively.

In reply, Bangladesh managed to reach the target in 48.1 overs for just five wickets. Mohammad Mithun top-scored with 91 while Mushifiqur Rahim contributed with 50 runs. Tamim Iqbal made 37.

Sri Lanka will play their first ODI of a three-match series against Bangladesh on 26 July at Khettarama.

October 27, 2019 byThe Sunday Morning No Comments
34 Sri Lanka cricketers were awarded with central contracts in five tiers, divisions “A”, “B”, “C”, “D” and the Primary division. Angelo Mathews secured the highest contract of $ 130,000