Barbadian Archer to play for England at WC 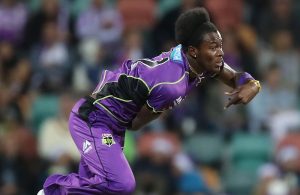 The decision could be a massive fillip for England going into their home World Cup campaign, in which they start as favourites after a remarkable turnaround in fortunes in recent seasons

Jofra Archer could be set to play for England in the both the World Cup and the Ashes next year, after the ECB announced a change to its eligibility criteria – from seven years to three – following its board meeting at Lord’s on Wednesday.

Archer, 23, was born and raised in Barbados, and represented West Indies at Under-19 level. However, he has been on Sussex’s books since arriving at the county in 2015, and has risen to become one of the most sought-after all-round talents in the world game – a quick and accurate fast bowler and hard-hitting batsman, who was bought by Rajasthan Royals for £800,000 in last year’s IPL auction.

Under the previous ECB regulations, Archer had been braced to serve a seven-year residency qualification, which would have made him available to England in 2022, by which stage he would have been 27. The terms of that regulation also required him to be in the UK for 210 days a year – causing conflicting priorities for a man who would be a marquee pick at any T20 tournament around the world.

In a press release, the ECB confirmed the changing criteria for players such as Archer, who had moved to the UK after their 18th birthday, stating that the new regulations brought the board into line with the ICC’s own regulations, which were themselves amended this year from four years to three.

The change will come into force on January 1, 2019, meaning that Archer could conceivably make his England debut on the tour of the Caribbean that starts later that month.

However, it is understood that, in order to meet his 210-day limit in time for that tour, Archer – who is currently playing in the T10 in the UAE – might have to renege on some of his oversees commitments, including this winter’s Big Bash. Otherwise, he will be become eligible to play for England in March.

“The exact date of Jofra’s qualification will depend on the time he spends out of the country during the rest of 2018-19,” said a Sussex spokesman. “Qualifying for England has long been an aim of Jofra’s and Sussex Cricket is delighted for him that this ambition will now be realised sooner than previously envisaged.”

Reacting to the news on Twitter, Archer wrote: “It may or may not happen but I would love to debut in front of my family.”

The new ECB eligibility criteria for players, both men and women, from January 1, 2019, are:

The decision could be a massive fillip for England going into their home World Cup campaign, in which they start as favourites after a remarkable turnaround in fortunes in recent seasons.

Eoin Morgan, the England ODI captain, was understood to have been an advocate for Archer’s fast-tracking – albeit he denied this in comments back in June – for if England lack one attribute in an otherwise very well rounded squad, it is a reliably quick spearhead, to complement an attack in which Chris Woakes, Ben Stokes, Moeen Ali and Adil Rashid are arguably the first-choice picks.

When fit, Mark Wood has been a preferred option to provide England with a pace injection, but his ongoing ankle issues mean his availability cannot be taken for granted, while Liam Plunkett – who plays a crucial role in the middle overs of an ODI innings – will have turned 34 by the time the tournament gets underway.