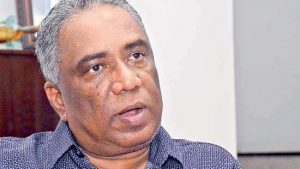 Bar Association President Kalinga Indatissa PC has refused to respond to allegations made against him by Minister of Justice and Prison reforms Thalatha Athukorale.
Athukorale had accused Indatissa PC of spreading false information during his discussions with the Opposition leader, former President Mahinda Rajapaksa. He was also accused of politicizing the BASL.
When contacted by The Morning, Indatissa stated that he has no intention of responding to the claims made by Athukorale.
“At the moment I have no intention of responding to the claims made by the Justice Minister. However, if the Executive Committee decides on a response we will respond formally,” he said.
The Justice Minister had earlier accused the President’s counsel of narrow Political objectives stating that Indatissa’s comments will result in the public losing confidence in the esteemed institution that is the BASL.
Tweet
Share
Pin
Share58
58 Shares

Opposition claims Govt. lost Rs. 538 b due to VAT slash

January 22, 2020 byTSM Web Desk No Comments
The opposition today claimed that the Government has lost a revenue of Rs. 538 B due to its decision to reduce VAT.