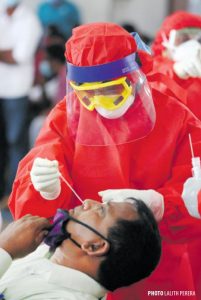 The second wave of the coronavirus officially hit Sri Lanka last week, as it recorded the largest-ever Covid-19 cluster since the first coronavirus patient was identified in the island in January this year.

However, the authorities are taking strict measures to control the spread of the virus while the Army and Police are currently tracking the contacts. The contacts this time are described as the hardest to track down compared to the previous smaller clusters reported a few months ago.

Even though the authorities have failed to identify the source of the Minuwangoda Covid-19 cluster, they denied any social transmission of the virus at the moment.

As statistics have shown, over 1,000 Covid-19-positive cases have so far been identified through PCR tests conducted during the week and among them, almost all positive patients, apart from some, are employees of the Brandix factory in Minuwangoda or their close associates.

So far, several patients have been reported outside the Minuwangoda cluster as well.

Nevertheless, the Government is yet to make a decision on imposing a lockdown.

Army Chief Lt. Gen. Shavendra Silva said last week that they do not intend to impose a countrywide curfew or a lockdown in Colombo city over the weekend, as they did not see any threat in areas other than those identified over the week.

Brandix in the limelight

A rumour was making the rounds that the employees of Brandix got infected from those who had come down to Sri Lanka from India. Allegations were also levelled against the management of Brandix that because they had not conducted proper health check-ups of their employees, the Covid-19 cluster spread throughout society.

Responding to allegations, Lt. Gen. Silva said that only 48 Sri Lankans working at the Brandix facility in India had been brought back, although there were reports of 60 returnees, and all of them had been quarantined at a hotel in Kosgoda and were made to undergo RT-PCR tests.

Meanwhile, Ministry of Health Chief Epidemiologist Dr. Sudath Samaraweera denied allegations levelled against the management of Brandix that they had ignored symptoms shown by their employees and instead instructed them to continue their routine work.

When contacted by The Sunday Morning, Dr. Samaraweera said it was unfair to point fingers at the management at present when the whole country was ignoring the health guidelines and behaving like there was no threat at all.

Commenting on the number of tests conducted at present, he said the authorities were currently conducting the maximum number of tests possible. “This is a big cluster and therefore, it takes some time to conduct the tests,” he said.

Dr. Samaraweera also noted that the apparel worker who was first diagnosed with the new coronavirus was not the origin of the Covid-19 cluster at the Minuwangoda Brandix garment factory and the virus may have been in the factory for several weeks.

According to Dr. Samaraweera, the employees of the factory had been suffering from respiratory ailments since 20 September.

He said that the Minuwangoda garment factory worker who was first diagnosed with the new coronavirus had shown symptoms on 28 September and was admitted to the hospital on 30 September.

“Therefore, the first patient identified was an intermediate patient, who had previously been infected with the virus at the garment factory, and it is possible that the first patient may have recovered by now,” he said.

He said since the first patients to be reported were from the factory, and if symptoms had appeared on 20 September, the virus would have entered the factory two weeks or more prior.

Even though it’s been a week since the identification of the first Covid-19 patient from Minuwangoda, the health and law-enforcement authorities were yet unable to detect the origin of the Minuwangoda cluster, The Sunday Morning learnt.

The authorities are, however, warning that the next couple of days would be crucial when it comes to the spread of the disease.

So far, Covid-19 cases have been reported from the Anuradhapura, Badulla, Galle, Kurunegala, Monaragala, Puttalam, Kegalle, Kalutara, Kandy, Matara, Polonnaruwa, and Ratnapura Districts and all these cases were directed for immediate treatment and quarantine, according to the Health Ministry.

Chief Epidemiologist Dr. Samaraweera also told the media earlier this week that it would be a very difficult task to identify who had got infected first among the Brandix workers.

The number of infections could be several thousand although approximately 1,100 persons had so far tested positive – the vast majority of them Brandix employees. Police headquarters said that the person who supplied food to the Minuwangoda police station too had tested positive. The Police identified his son as a Brandix worker. Later, nearly 100 officers and men attached to the Minuwangoda Police were subjected to RT-PCR tests while services were suspended temporarily.

Last Wednesday night (7), while being moved by the Army to a quarantine facility, a person died of a heart attack.

Police Spokesman DIG Ajith Rohana also said some of those high-risk groups were yet to voluntarily submit themselves for RT-PCR tests.

Urging the public to wear face masks and adhere to the health guidelines, he said even though police curfew was imposed only in 18 police areas in the Gampaha District, the risk and danger of Covid-19 spreading across the county still remained.

Meanwhile, DIG Rohana said that according to health and intelligence unit statistics, several employees attached to the Brandix factory in Minuwangoda are to be traced to undergo quarantine. Around 125 employees at Brandix reported to the respective police stations and health officials last Thursday (8) for the quarantine process.

The Police Spokesman, however, said that strict action would be taken against those who continue to avoid the quarantine process under the Quarantine and Prevention of Diseases Ordinance.

The Covid-19 pandemic is continuing across the globe, with over 36 million cases reported across 190 countries.

Not just Sri Lanka, but many countries across Europe are also seeing a resurgence in Covid-19 cases after successfully slowing outbreaks earlier in the year. According to international media reports, the vast majority of countries are declaring more cases each day now than they were during the first wave earlier this year. But, while infection numbers may appear higher, it could simply be that increases in testing capacity are identifying more cases.

Although countries across Europe previously appeared to have gained control of the virus through strict lockdown measures, many countries in this region are now concerned about experiencing a second wave. The second spike of Covid-19 cases was seen in the UK at the start of August, and while the new daily cases are currently increasing at a lower rate than was seen in the first wave, precautionary measures must be taken to prevent them from increasing any further.

A new strain of virus?

Concerns have been raised over the current strain of the Covid-19 virus, as doubts have emerged on whether the country is hit by a new strain of the virus, The Sunday Morning learnt.

According to the Government Medical Officers’ Association (GMOA), a clear picture of the ongoing situation could only be assessed after a lapse of 48 hours as tests were still being conducted and the investigations were still underway, they said on Friday (9).

GMOA Secretary Dr. Senal Fernando told The Sunday Morning that in the current situation, even asymptomatic persons seem to be spreading the virus more than the earlier situation.

“We still don’t know whether we have got a new strain or whether it’s the same strain. Even in other countries there were discussions that there are different types of Covid-19 strains,” he said, adding that depending on how the virus entered the country, the strain could be different; it could either be better than the previous situation or worse.

“But as of now, the current situation is worse than earlier, as it seems that even asymptomatic patients are spreading the virus. A clearer situation will be seen after 48 hours,” Dr. Fernando stressed.

According to the GMOA, contact tracing, maintaining physical distance, and increasing the number of PCR tests conducted should be done immediately to avoid any social transmission of the disease.

“It’s still too early to say whether there is a social transmission and also the contact tracing of the infected persons will be difficult unlike the previous situation,” he stressed.

Meanwhile, President Gotabaya Rajapaksa had instructed relevant parties to take immediate measures to contain the spread of Covid-19, identify close associates of the affected, and to increase the number of PCR tests being conducted.

Instructions were issued to carry out random PCR tests in every district in the country as well as in institutions. Organisations where a large number of people are employed have been asked to conduct tests. However, it does appear that the factories with large workforces have neglected this responsibility.

The requirement to gazette the existing rules and regulations aimed at preventing Covid-19 was also discussed during the meeting held this week.

Meanwhile, according to the World Health Organisation (WHO), the number of new cases per week has remained stable at two million for the past three weeks, with the cumulative total of over 36.7 million cases as of Friday. Over one million deaths were now reported globally, of which the majority were reported in the region of the Americas (55%), followed by Europe (23%).

In the past week, the region of the Americas, South East Asia, and Europe accounted for 91% of new cases. Five countries (namely India, the US, Brazil, Argentina, and France) reported 60% of new global cases this past week, while Israel registered the highest incidence (3,717 new cases per one million population).

It further stated that in several countries, the number of new cases is rising again, and in many (most notably within the European region) the second wave is exceeding previous peaks; this can be partly attributed to enhancements in surveillance capacities over time. In other countries, a gradual decline in new cases from earlier peaks in August, for example in Brazil, Colombia, and Peru, can be seen. In India and the Philippines, the number of new cases appears to have stabilised, but they are still reporting high numbers. There are also examples of countries that have consistently shown an increasing incidence, as their first wave continues; these include Indonesia, Iraq, and Myanmar, although Indonesia is reporting a slight drop this week. South Africa and Australia are examples of countries that have successfully managed to reduce the number of new cases and have seen large reductions from earlier peaks.

As of Friday, the total Covid-19 infections confirmed so far in Sri Lanka stood at 4,504. By Thursday evening, seven arrivals from the United Arab Emirates (UAE) including five naval personnel, two others from Iran, and one from Kuwait were confirmed to have tested positive for Covid-19. The number of Covid-19 patients reported from the new cluster linked to the Minuwangoda apparel factory rose to 1,053 that night, as one factory worker and 18 contacts tested positive for the virus. Accordingly, 29 novel coronavirus infections in total were detected on Thursday. In addition, two factory workers, 11 close contacts, and three possible cases tested positive for Covid-19 on Friday, bringing the total detections for that day to 16. In the meantime, recoveries reported from the disease stand at 3,296 while the number of active cases currently under medical care reached 1,195 as of Friday, health statistics revealed.

November 1, 2020 byCharindra No Comments
The MEPA expert committee is to submit a quantification report to the AG over the anticipated civil liabilities that resulted from the oil spill.

October 18, 2020 byCharindra No Comments
The Consumer Affairs Authority (CAA) on Friday (16) denied claims that they had issued a gazette notification authorising the importation of blended oils.