‘Be aggressive and take wickets’ – Trent Boult on his T20 gameplan 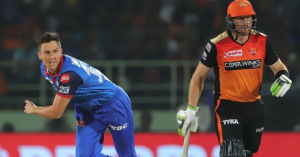 Trent Boult says he will try to be aggressive and take wickets in his first T20I appearance in more than 18 months, as he comes back into the New Zealand side for the fourth game of the series at Napier.

Boult has not played a T20I since the final of the tri-series against Australia and England in January 2018, having been rested and rotated out of New Zealand’s squads to manage his workload, but replaces Lockie Ferguson for the final two games of the ongoing series.

“There’s a series on the line here at the moment,” Boult said, “and obviously I’m eager to come in and put my best step forward. It’s a format that I haven’t been involved in much at the international level over a period [of time], but I’m looking forward to coming in and trying to do my thing.”

While Boult hasn’t pulled on the grey strip for some time, he has been an IPL regular for Delhi Capitals over the last two years. He took 18 wickets in the 2018 season, finishing as the side’s leading wicket-taker (Delhi Daredevils at the time), and played five games this year, though struggled to nail down a spot.

“It’s the same mindset that I always take into most formats: trying to be aggressive, trying to take wickets, and trying to do my role for the side,” Boult said of his T20 gameplan, “and that is being aggressive with the ball – I’ll try and do that over the next couple of nights.”

“She’s always a beautiful wicket here [at Napier]” he said. “I hope I don’t get to bat on it, but I’m presuming it’s going to be a pretty good surface. It’s not the first time I’ve played here obviously, and we’re familiar with the grounds around the country.

“It’s 2-1 in the series, and hopefully we can put a good performance forward and seal off a nice victory in the series.”

Boult has been tuning up for the upcoming Test series by playing for Northern Districts in the Plunket Shield, and took eight wickets across the two games he has played for them in the last two weeks.

The second of those games was a defeat at Mount Maunganui, which will host its first Test on November 21 as the England series gets underway, and Boult said he was looking forward to playing international cricket at the ground.

“It was nice to get some red-ball stuff done at the Mount looking towards the Tests in a couple of weeks’ time,” he said. “It’s just beautiful this time of year. [I’m] looking forward to that Test match there, the inaugural one, and it looks like it’s going to be a good wicket. There’s a lot of hum and a lot of vibe going on in the Bay of Plenty for some Test cricket there.”

Another man who could join Boult in the squad for that Test is Ferguson, who is set to play for Auckland in the round of Plunket Shield games starting on Friday. Ferguson is yet to make his Test debut, but could force his way into the reckoning with a strong performance in what will be his first first-class game since March. espncricinfo

October 10, 2019 byRevatha No Comments
SL returns after their Pakistan tour, where they were given security equivalent to that is provided to heads of state, after recording their first-ever T20I series whitewash against Pakistan