Following the death of the late Minister Arumugam Thondaman, several institutions and concerned personnel have expressed displeasure at how the regulations announced by the Ministry of Health and the curfew imposed by the Sri Lanka Police had been disregarded over the weekend.

While the entire country was to follow strict health guidelines at a time where the Covid-19 pandemic spreading is still very much a possibility, it seems that politicians and their kin are acting as if they are exempt from the law being enforced.

The Morning contacted Nuwara Eliya Police Division Deputy Inspector General of Police (DIG) A.K.C. Athukorala to inquire how people were allowed to disregard the regulations in place and how even with the curfew in effect on Saturday and Sunday (30 and 31), thousands were permitted to attend the late minister’s funeral, without following the health guidelines.

“On Friday (29), we observed that we were unable to control the crowd. Therefore, we imposed a district-specific curfew on Saturday and then followed the island wide curfew on Sunday. Only those who had curfew passes were permitted to travel across districts to attend the funeral,” DIG Athukorala said.

When we further questioned him as to whether legal action would be taken should they not follow the health guidelines, he confirmed that the funeral directors/organisers have been informed to adhere to the guidelines and units were to be deployed to maintain the regulations.

Police Media Spokesperson SP Jaliya Senaratne was contacted for further clarification on what measures the Police were planning to take with regard to those who disregarded the health guidelines over the weekend to attend the funeral.

“He was a politician and his supporters were to be given the opportunity to mourn and pay their last respects. We agree that the whole funeral procession that took place earlier last week gathered too much of a crowd on the wayside, which is why the remains were arranged to be airlifted from Colombo to Gampola,” he noted.

However, since there was no curfew in place, the people could not be stopped from coming to the road to pay their last respects to the late politician, SP Senaratne added. He also noted that following this, the Acting IGP took a decision to impose curfew for the Nuwara Eliya District on Saturday to restrict overcrowding.

“Whoever attended his funeral on Sunday were people who arrived there by foot and the vehicles that entered the town had obtained curfew passes to attend the funeral. Our officers along with the public health inspectors from the Nuwara Eliya RDHS (Regional Director of Health Services) were at the location to ensure that people followed the health guidelines,” SP Senaratne stated.

The Public Health Inspectors Union of Sri Lanka (PHIUSL) and the Sri Lanka Medical Association’s (SLMA) Intercollegiate Committee issued statements expressing their displeasure on the public being allowed to gather in large numbers at a time where a pandemic is potentially heading towards a second wave. 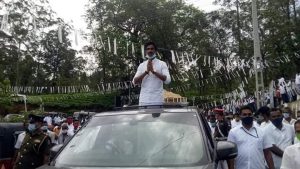 Apart from them, the Centre for Monitoring Election Violence (CMEV) observed the funeral procession as an act of violation over pre-election campaign regulations, when the successor for the late minister’s position was parading in an open vehicle from Gampola to Kotagala, subliminally launching his election campaign.

The SLMA, issuing a statement on their observation of the increasing trend of public gatherings, noted that all measures that were taken by the health sector with the support of the tri-forces and Police to control the pandemic to a great extent, will soon be in vain as many have failed to observe key control measures of avoiding social gatherings, maintaining physical distance, hand hygiene, and the use of face masks during the recent public events.

The SLMA further clarified that unless strong deterrent action is taken by the authorities, the country will likely witness a more serious increase in the number of such public gatherings, leading to an exponential increase of the many problems that the Covid-19 pandemic is likely to cause.

Meanwhile, the PHIUSL cautioned that should there be a cluster of Covid-19 cases emerging from the crowd that attended the funeral, their union would file national and international lawsuits under the violation of the regulations of the Quarantine Act.

PHIUSL President Upul Rohana also revealed that they had received news of how one of the funeral organisers had threatened the Director General of Health Services over a telephone call over matters of the funeral service.

The PHIUSL also questioned President Gotabaya Rajapaksa as to who granted certain persons the authority to hinder the work that is carried out by law-abiding public officials.

“The entire country is aware that these people have blatantly violated all quarantine laws and health instructions. Opposition parties, professionals, and all communities should rally against such threats when the country is still in danger,” Rohana added.

October 16, 2020 byCharindra No Comments
Grocery shops and pharmacies in areas under quarantine curfew are to be open from 8 AM to 10 PM today (16), stated the National Operations Centre for Prevention of Covid-19 Outbreak (NOCPCO).

November 4, 2020 byMihi Perera No Comments
The Government Medical Officers Association (GMOA) has revealed today (04) that it had resigned from the technical committee of the Ministry of Health owing to concerns regarding the handling of COVID