November 22, 2020 by Madhusha Thavapalakumar No Comments

The Airport and Aviation Services (Sri Lanka) Ltd. (AASL) is expected to enter into a labour agreement on 30 November with the workers who will be imported to commence the construction of the long overdue second terminal (Terminal II) at the Bandaranaike International Airport (BIA).

The ground-breaking ceremony was held on Wednesday (18) and the construction is set to commence on the same day the agreement is signed, AASL Chairman Maj. Gen. (Retd.) G.A. Chandrasiri told The Sunday Morning Business. 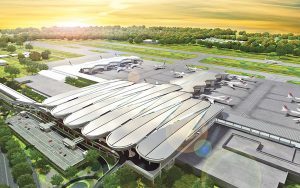 The ground-breaking ceremony was held under the patronage of Prime Minister Mahinda Rajapaksa coinciding with his 75th birthday with the participation of Ambassador of Japan Akira Sugiyama.

Terminal II construction ran into numerous obstacles that delayed the implementation of the project by over four years, despite the dire need of a second terminal at BIA.

Chandrasiri added that Terminal II will be completed in three years, meaning by November 2023, at which time the BIA would be able to handle a combined passenger capacity of 15 million.

The Japan International Co-operation Agency (JICA) is the concessionary loan provider for the new terminal at BIA. The loan agreement of Rs. 56 billion was signed over four years ago on 24 March 2016. The continued involvement of JICA in this project is interesting, as the Sri Lankan Government recently withdrew from the Light Rail Transit (LRT) Project which was to be funded by JICA, leading to damaged relations between Sri Lanka and long-term ally Japan, according to certain observers.

After years of delays driven by tender-related issues, the project was finally set to launch at end-August and was expected to be completed by August 2023 as a measure to mitigate passenger congestion issues, as exclusively reported by us in July.

However, in early August, the construction was postponed to early September due to complications in importing workers from Japan, China, Malaysia, Singapore, and various other countries amidst Covid-19.

Maj. Gen. Chandrasiri confirmed that changes were not made to the original design of Terminal II or to the earlier decision to award the tender to Taisei Corporation, a Japanese construction company. AASL signed the contract agreement with Taisei on 12 March.

Terminal II was planned in 2016 and was expected to be in operation by 2020, but was deferred as the bids from the Japanese companies were far higher than the engineer’s estimate. Therefore, an interim terminal was planned with a passenger capacity of two million.

The $ 18 million interim terminal project was set to take off when the Cabinet of Ministers gave approval for it to be awarded to China State Construction Engineering Corporation (CSCEC) on 3 October 2018. However, due to an appeal by Maga Engineering (Pvt.) Ltd., the work did not commence.

Maga – one of the six companies which bid for the construction of the interim terminal – scored the highest points in the evaluation, and was recommended by the Standing Cabinet Procurement Committee to be awarded the project.

However, on an appeal by the CSCEC, the Procurement Appeal Board overturned this decision and awarded it to the Chinese company, which subsequently received Cabinet approval.

Following the awarding of the project to CSCEC and the Cabinet approval, Maga appealed to the Supreme Court in October last year. Plans to construct the interim terminal were abandoned eventually.

Amidst the absence of a terminal, the current Government began negotiations with JICA requesting bidders to bring down their bids or Sri Lanka would find another fund provider. Following extensive discussions, one of the two bidders agreed to lower the bid and this bidder is Taisei Corporation.

The new terminal is expected to handle a passenger capacity of nine million as initially planned while the existing terminal handles about six million passengers annually.

The BIA has been in dire need of another terminal for years now. It had more than 170 aircraft movements per day, including an average of more than 60 movements of heavy aircraft per day in 2018. The existing six million-passenger terminal handled 10 million passengers in 2018, resulting in hours of delays, particularly as passengers were trying to collect their baggage.

According to the annual reports of AASL, the airport experienced heavy congestion in the arrival and departure zones, as well as vehicular traffic, particularly during peak hours; all  while passenger arrivals grew 5-6% Year-on-Year (YoY).

PM says won’t turn to IMF again, but Chinese loans not an issue

September 12, 2018 byCharindra No Comments
PM Ranil Wickremesinghe said yesterday that Sri Lanka has turned to the IMF too often and should learn to manage on its own, but denied that Chinese loans and investments are creating a debt trap.

May 20, 2019 bythemorninglk No Comments
Digital marketing agencies had been severely affected by the recent bans on social media due to a lack of digital advertising opportunities.