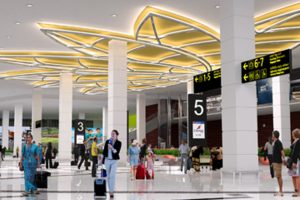 An illustration of the proposed second terminal

The Ministry of Tourism and Aviation has extended the deadline provided to the Japan International Co-operation Agency (JICA) to agree to bring down the bidding price for the construction of the second terminal of the Bandaranaike International Airport (BIA), The Sunday Morning Business learns.

The timeline, as exclusively reported by The Sunday Morning Business on 12 January, under the headline “Govt. gets tough with Japan on new BIA terminal”, was to expire last Wednesday (15), but has now been extended considering the ongoing negotiations.

Speaking to The Sunday Morning Business, Secretary to the Ministry of Tourism and Aviation S.M. Mohamed noted that as of Friday (17), no final decision had been reached. However, she refused to disclose the duration of the new timeline given to JICA.

“We have not finalised anything yet. Until it goes to the Cabinet of Ministers, I’m not in a position to disclose any information. Negotiations are not yet finalised between the Ministry and JICA,” Mohamed noted.

The Sri Lankan Government started negotiations with JICA, the fund provider of the BIA terminal 2 project, following a deadlock of several years, in which JICA refused to budge from the original quotations submitted by two Japanese contractors, which were 46% and 96% higher than the engineer’s estimate.

Minister of Industrial Exports and Investment Promotions, Tourism, and Aviation Prasanna Ranatunga, following a discussion with the Embassy of Japan in Sri Lanka, had imposed a deadline of 15 January before which JICA had to inform whether it can reduce prices of its bidder.

Speaking to The Sunday Morning Business late last week, Minister Ranatunga said that in case of a failure by JICA to bring down the quoted prices of its contractors before Wednesday (15), the Sri Lankan Government would cancel the loan agreement with JICA.

JICA is the concessionary loan provider of the long-delayed new terminal at BIA. The loan agreement of Rs. 56 billion was signed almost four years ago on 24 March 2016 between Airport and Aviation Services (Sri Lanka) Ltd. (AASL) and JICA.

However, the Minister indicated that the Government would still prefer to proceed with JICA as significant time and effort has been invested into this project on the understanding that the funding would come from JICA.

A change at this stage would push back the timelines considerably, further intensifying the issues around congestion and lack of facilities at BIA.

The project would be developed based on the concept of eco-airports with the utilisation of Japanese advanced technology and knowhow. In order to promote technology transfer and economic co-operation between Sri Lanka and Japan, JICA’s loan is provided under the Special Terms for Economic Partnership (STEP), with 0.1% p.a. interest and a 40-year repayment period.

SPSE and CSE enter a Memorandum of understanding to enhance collaboration

January 15, 2019 byRandev No Comments
The Colombo Stock Exchange have signed Memorandum of Understanding with the South Pacific Stock Exchange in the hope of mutual development.