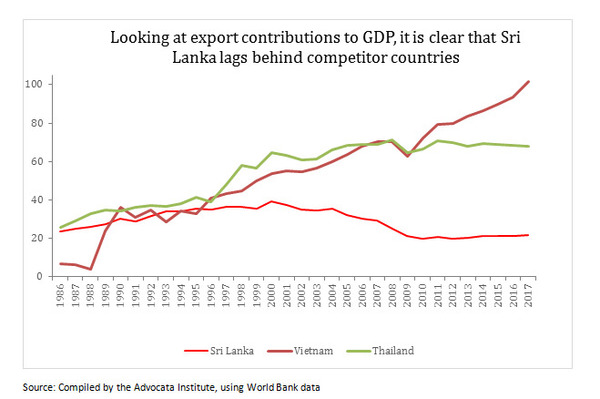 All eggs in the tourism basket?

The Easter Sunday attacks devastated Sri Lanka. As much as the attacks shattered lives, the economy too has taken a hard hit. According to Reuters, full-year median growth could drop as low as 2.5%, with analysts concerned that second-quarter growth could be zero or even drop to negative. To give these numbers context, these growth numbers are the worst the country has seen since 2001, when Bandaranaike International Airport (BIA) was attacked. The economic hit to the tourism sector is the most visible, due to the nature of the attacks, with occupancy dropping drastically from 75% to a paltry 5%.

Officially, the tourism sector accounts for 5% of GDP, but in reality, the industry adds a lot more to the economy. The growth we see in the formal tourism sector is also an indication of the growth created in the informal sector. If one gets off the train at Ella or walks around Sigiriya, it is clear that a large number of tourists backpack throughout the country; staying at low-budget homestays and eating at local eateries. The result is a boom in local industries as people work as tour guides, make cheese kottu, drive a trishaw, and take a loan to build a homestay on their property.

This addition to the economy is notoriously difficult to enumerate, and it is virtually impossible to include all economic activity created by tourism into national figures. However, one can conclude with certainty that tourism is an important sector on which the livelihoods of thousands of people are dependent.

While this seems positive, the downside is that this means that the lull in tourism has an impact that goes far beyond what’s calculated. The economic losses and instability brought to thousands of livelihoods is difficult to comprehend. The Government put forward a relief package for the industry, and while this is timely, it is also important to look at the rest of the economy.

Before the attacks, the industry was optimistic – Lonely Planet ranked us the number one destination for 2019, and the Government launched the “So Sri Lanka” brand. It is clear that growth in this sector was and continues to be a priority. However, if we want to create long-term, sustainable growth for the country, more needs to be done.

Resilience beyond the comfort zone

While tourism is important and we do need to focus on this, we cannot neglect the rest of the economy. Ideally, our economy should be resilient, with other sectors of the economy able to absorb a shock, reducing the time taken for the country to recover. While we have a comfortable comparative advantage in tourism, we need to move into other areas.

For all intents and purposes, Sri Lanka opened its economy in 1977. While we were one of the first countries in the region to open up, our export sector failed to keep pace with our comparator countries. Nationalist sentiment drove mainstream discourse, and free trade is perceived as a threat to local industries and local jobs. Successive governments were swayed by or actively promoted this perception, resulting in a country which is in practice, not very open.

Export diversification has been a buzzword over the last few years. GDP growth in countries such as Vietnam and Indonesia was driven by strategic export diversification. As is visualised in the chart, these countries are miles ahead of Sri Lanka in the contribution their exports make to GDP. Sri Lanka has recognised the importance of export growth, and key areas have been targeted through the National Export Strategy. However, export diversification will not happen overnight, and it will not happen in isolation. There needs to be a legal and regulatory environment that is conducive to this growth, creating the right incentives for businesses to take the initiative and diversify. As such, the Government should push a much wider reform programme. 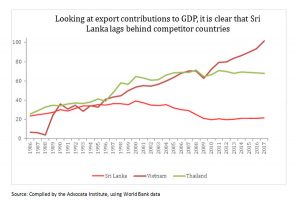 The Singapore-Sri Lanka Free Trade Agreement, signed in 2018, was the first trade agreement we signed in a decade. This is only a partial victory – the trade agreement faced significant opposition, even after it was signed. The Government needs to take the initiative, not only to sign free trade agreements, but also to make sure the local businesses are in a position to take advantage of these agreements.
A vital part of creating buy-in on a national scale is the effective and timely dissemination of information. Open, transparent discussions should be held before signing free trade agreements; these would go a long way in countering anti-free trade mentality.

In addition, regulations should be eased for export-oriented businesses; making it easier and not more difficult for an entrepreneur to sell their product abroad. Finally, the Government should speed up its current programme of tariff removal. Restricting imports to the country via tariff barriers actually suppresses the growth capacity of our export industries. Free trade works best when borders are truly open and intervention is limited, and our export industries often depend on imported inputs which are cheaper than local alternatives. By removing tariffs on these imported inputs, the Government will allow export industries to produce goods at lower prices, and price their final goods on par with global competition, creating opportunity for our export industry to grow and diversify.

While it is important that focus is given in the short term to industries that have been hit the hardest, a responsible government would take this opportunity to assess the health of other key sectors of the economy, and take steps to facilitate their growth, as opposed to hindering it.

Aneetha Warusavitarana is a Research Analyst at the Advocata Institute. Her research focuses on public policy and governance. She can be contacted at aneetha@advocata.org or @AneethaW on Twitter. Advocata is an independent policy think tank based in Colombo, Sri Lanka. They conduct research, provide commentary, and hold events to promote sound policy ideas compatible with a free society in Sri Lanka.

March 29, 2020 byCharindra No Comments
The government's focus on import controls and lack of focus on the informal sector may diminish the effectiveness of its relief measures, notes Advota Institute in its weekly column.

December 5, 2018 byCharindra No Comments
Gamer.LK and Dialog will be hosting the country’s largest Digital Entertainment and Technology Expo for the second consecutive year from Friday.