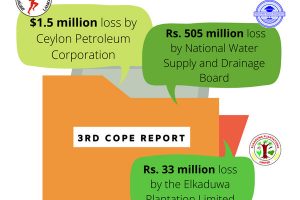 On 22 October, the Committee on Public Enterprises (COPE) presented its Third Report to Parliament which examines the performance of 23 state-owned enterprises (SOEs) over the last 19 months (1). The findings are certainly characteristic of the widescale corruption, wasteful spending, and poor management practices that Sri Lanka’s SOEs are renowned for.

The Chairman’s Note within the report states: “As people are the true shareholders of public enterprises, the right to ascertain that public enterprises invest money so that people get a fair share of its benefits rests with them while it reinforces the democratic foundation of our country (2).” But unfortunately, as they stand today, Sri Lanka’s SOEs serve exactly the opposite function. Rather than equally distributing the benefits of invested taxpayer money through the Treasury, SOEs place an exorbitant burden on an already debt-ridden economy.

Investigating just 23 of the 450 institutions that the Committee is responsible for overseeing, the report paints a frightening picture of the cumulative extent of damage SOEs have done to Sri Lanka’s economy in recent years (3). There is no doubt that the current system within which SOEs operate cannot be sustained by the economy. A multitude of reforms have thus been proposed to reduce the toll that SOEs take on the Treasury, ranging from the creation of a public enterprise board to partial and complete privatisation. However, little to no headway has been made in terms of implementation, likely due to the size of these reforms and supplementary lack of political willpower.

How bad is the damage?

According to the Third Report of the COPE, the 18 SOEs with furnished financial statements investigated in the report made a net loss in 2018 amounting to Rs. 61 billion (4). The report highlights that the Ceylon Petroleum Corporation alone made an enormous loss of Rs. 105 billion in 2018, while the National Water Supply and Drainage Board incurred a loss of Rs. 505 million, and Elkaduwa Plantation Ltd. incurred a loss of Rs. 33 million (5). Of the 23 institutions being examined, five were found to have annual losses over Rs. 2 million, while another five did not have furnished end-of-year financial statements to present (6).

The report also outlined several accounts of a wide array of malpractice, including tampering with financial statements, bloating project valuations, conducting unauthorised procurement, failing to collect outstanding debts, and perpetrating political victimisation. Some explicit examples include:
· The Ceylon Petroleum Corporation was found to have wasted over $ 1.5 million on 11 urgent procurements that were undertaken while term agreements were still in place (7)
· Payments for the construction of the Sooriyawewa Stadium by the Sri Lanka Ports Authority amounting to Rs. 3.9 billion, were found to have been removed from the books of the Port Authority in 2017 (8)
· An enquiry on the Football Federation of Sri Lanka revealed instances of financial fraud committed by the Manager – Finance, through tampering with the official audit reports of the Auditor General and fraudulently impersonating the President of the Federation on repeated occasions (9)
· A stocktake of the State Pharmaceuticals Corporation found Rs. 20.7 million worth of stocks missing, while Rs. 104.4 million was found to be spent on substandard and expired medicine in 2017 alone (10)
The report thus records over 250 recommendations provided by the Committee to the public enterprises being examined. However, the findings of the Committee also reveal that approximately a third of these recommendations have either not been implemented or not been reported on.

Sri Lanka’s total public debt currently amounts to 82.9% of GDP, with domestic debt amounting to 41.6% of GDP, making it one of the most debt-ridden economies in South Asia (11).
With slowing growth and increasing rollover risks, Sri Lanka’s Treasury cannot sustain annually bailing out loss-making enterprises. There is an urgent need for stronger regulation and tight reforms to stop SOEs from draining public funds.

During the presentation of the latest report to Parliament, COPE Chairman MP Sunil Handunetti requested the Speaker to allow the Attorney General’s Department representatives to observe the proceedings of the COPE, in an effort to expedite accountability procedures (12). This would certainly present a positive step towards strengthening the legal oversight of malpractice within SOEs and expediting the prosecution of this malpractice. Although the COPE is doing a relatively robust job at identifying incidences of malpractice, this process tends to be slow and lacks sufficient follow through to hold responsible individuals accountable.

The opening up of COPE proceedings to the media has already brought about substantial scrutiny of SOE conduct, however, a lack of enforceable, follow-up accountability mechanisms limits the capacity of this measure. As noted above, several of the SOEs being examined are yet to implement any of the regulatory measures recommended to them by the COPE (13).

Strengthened accountability mechanisms are thus essential to both holding corruption within SOEs to account, as well as ensuring that the recommendations of the COPE are adhered to. A mechanism needs to be established in order for individuals to be held personally liable for the damages that they are responsible for, beyond just the COPE proceedings. This should extend to all persons who perpetrate, assist, and become aware of malpractice, and do not report it through the appropriate channels.
The surcharge provision of the National Audit Act that allows for the recoupment of any loss caused to the Government by the responsible public servant(s) could prove a useful avenue to achieving this (14).
There is also an apparent need for industry experts to be further involved in the oversight process. Currently, the COPE reports offer little in the way of strategic enterprise reforms that go beyond merely identifying areas of issue, and look to improve the efficiency and profitability of public enterprises. Technical expertise could therefore prove extremely useful in not only identifying areas for further scrutiny and investigation, but also in creating more effective recommendations for management reforms.

The Commonwealth Association of Public Accounts Committees itself states that the appointment of non-parliamentarians is not without precedent, and given the importance of the Committee, is something that should be considered seriously (15).

Parliamentary members of the COPE often lack the time and capability to rigorously investigate instances of collusion and malpractice as they happen, and thus support committees of industry experts could prove a valuable resource in addressing this. Appointing non-parliamentarians to the COPE would thereby strengthen the Committee’s independence, increase diversity, and enhance its competency.
Moreover, if the Sri Lankan people are to truly act as the shareholders of public enterprises, they need to be provided with open access to COPE proceedings.

At present, inquiries must be raised by a member of Parliament in order for them to be addressed by the COPE. This distinctly undermines the ability of the public to hold SOE malpractice to account. The limits on non-parliamentarians for attending COPE hearings should be removed, and hearings should be made more accessible to all members of the public. Increased transparency is not something shareholders should have to ask for, especially not from their government.

The Organisation for Economic Co-operation (OECD) proposes a range of guidelines for the corporate governance of SOEs, including the equitable treatment of all shareholders, equal access to corporate information, transparency, and disclosure (16).

Perhaps a relatively simple way of achieving this would be to list all of Sri Lanka’s SOEs on the Colombo Stock Exchange, thereby making them subjected to the already robust Securities and Exchange Commission (SEC) regulations.

These avenues present achievable interim measures that Sri Lanka should capitalise on. The recent strides made by the COPE are certainly promising in their movement towards stronger regulation and increased public scrutiny, however, Sri Lanka still has a long way to go if it is to seriously mitigate the burden placed on its Treasury by the current state of SOEs. Implementing these reforms could serve as a strong start, but larger reforms will also be essential in achieving sustainable fiscal consolidation.

(The writer is a Research Intern at the Advocata Institute. Her research focuses on public policy, international relations, and good governance. She can be contacted at nishtha@advocata.lk. Advocata is an independent policy think tank based in Colombo, Sri Lanka. They conduct research, provide commentary, and hold events to promote sound policy ideas compatible with a free society in Sri Lanka. The opinions expressed are the author’s own views. They may not necessarily reflect the views of the Advocata Institute, its Board of Directors, its research fellows, or its advisors)

December 27, 2019 byTSM Web Desk No Comments
Kanchana Ratwatte has been appointed as the new Chairman of Bank of Ceylon (BOC).

Ideal political climate for FDI would be coalition-free

July 23, 2019 bythemorninglk No Comments
What do we have to do to attract these investors to Sri Lanka?