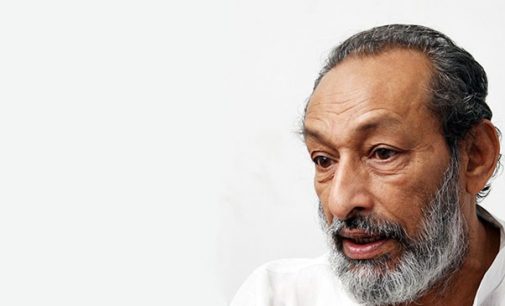 Blame falls on those concerned with law and order: Vasudeva Nanayakkara

United People’s Freedom Alliance (UPFA) Parliamentarian Vasudeva Nanayakkara told The Sunday Morning that Sri Lanka should distance itself from countries such as the US and Israel as Sri Lanka unnecessarily becomes the targets of those who are victims of these big powers.

He said that Sri Lanka should only rely on India for assistance in tackling this threat for now.


The President said in his speech that there had been intelligence of these extremist groups planning terror activities as far back as 2014. Yet no action seems to have been taken to address the threat. Who do you think is at fault?

The blame falls on all persons concerned with the subject of law and order. On the other hand, the preventive action that should be taken against such terrorist groups, who are planning to cause havoc in the country, is the Government, and they have been sleeping. They had taken people into custody but never followed up to the point of the sword.


Ten years after the war, Sri Lanka is faced with a new threat. Should we, as a country, have been better prepared to face such a global threat as opposed to just looking at domestic issues?

I dare not say that we can face up to a global threat, but we can always go to the source and find out if there are global connections to those who are engaged in these activities. If we had done that, we might have been able to save the situation to some degree.


This whole issue has now become a political game where one is blaming the other and the two main political parties are trying to use it for their political gain. Are political leaders playing their roles correctly?


This incident has seriously affected tourism and the country’s economy. How long before we recover from this?

It will be difficult, but the sooner we are able to normalise the condition of the country, the better our chance in recovering the tourism industry.


The international community has offered various forms of assistance to Sri Lanka to address this threat. Yet locally some are very sceptical of accepting such assistance. Should we work with major superpowers to ensure our country is safe?

We have a big problem about the involvement of big powers because big powers invade countries and then in those countries the real birth of terrorism begins. Al Qaeda in Iraq and the Taliban in Afghanistan are consequent to invasions of those countries by the US.
So in these circumstances, it is better if the US keep off. Already we are involved in a foreign policy that goes along with the US and also Israel, in particularly Mangala Samaraweera’s statement and decisions at different times which favour Israel, who themselves are operating with their own terrorist gangs.

All this is unnecessary involvement. This has been, in my view, partly the fault for the National Thawheed Jamath to have chosen Sri Lanka as the centre of their activities presently. Israel has their own terrorist bodies to counter terrorist activities they say. But they are in conflict with the entire Muslim world except with Saudi Arabia and such other countries.

The Al Qaeda, Taliban, and various other outfits have a strong contradiction with Israel and US. Therefore, we must lessen their involvement in our country, because we unnecessarily become the targets of those who are victims of these big powers.


What about assistance from India and China?

India, yes. They are our friend and our neighbour and I think we should rely on India only at the moment.


Considering what has happened now, do you think elections should be held or that money should be saved to help those affected by the attack?

The precise point about holding elections is what was sought to be put off by these actions, for some. These explosions bring about a state where the mindset of the people goes entirely outside the current issues and thus paving the way even to put off elections and thus helping the present regime to continue – so damagingly and so devastatingly to the country and the people.


So you think elections should be held as expected this year?

Yes, they should be held. There should not be a single day delayed. Already, our May Day is under threat. May Day is something we celebrate for the cause of the workers and to display the slogans which are uncomfortable to the Government.

We have been presently asked to hold the May Day rally in quiet or not to hold it at all or to minimise celebrations. So this is the first result the reactionary regime has gained out of the attack.

No risk to party unity : Harsha