September 22, 2020 by themorningeditor1 liberty No Comments 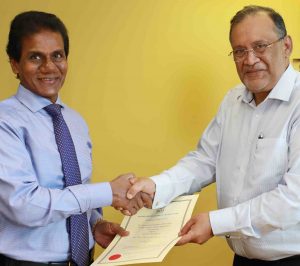 The agreement was signed on behalf of the Board of Investment (BOI), by BOI Chairman Susantha Ratnayake and Indra Hotels and Resorts Kandy (Pvt) Ltd. Chairman Indra Silva

The $ 29.32 million project will facilitate the building of this lean luxury property which is expected to be completed in mid-2022. A part of the Cinnamon brand, the property will be managed by Cinnamon Hotel Management Ltd.

“It will feature signature services, facilities, and offerings, including an expansive rooftop bar and swimming pool, as well as a restaurant that will serve local and international cuisine on both buffet and à la carte basis,” BOI said.

Cinnamon Hotels and Resorts initiated the lean luxury concept and segment to Sri Lanka in 2014 with Cinnamon Red Colombo. With the addition of this new property in the hill capital, Cinnamon Red Kandy will become the first and only Leed Gold-certified hotel in Kandy.

“The investment augurs confidence in the destination, looking beyond the current crisis, given the significance that the sector plays in the country’s economy. It is also aligned to the Government’s overall vision of generating a revenue of $ 10 billion by 2025,” BOI added.

June 7, 2020 byCharindra No Comments
After several weeks of discussions, the Central Bank last week granted a request by the banking sector to allow them to charge interest from lenders who are under the Covid-19 moratorium.

July 20, 2020 byCharindra No Comments
Sri Lanka continues to marginalise and restrict the country’s largest minority at a time when we need as many productive consumers and workers as possible to be active in order to jumpstart our...