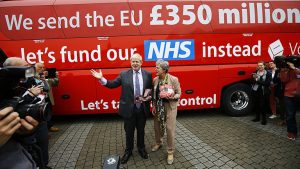 A UK judge has ordered the controversial MP Boris Johnson to appear in court over allegations the Brexiteer lied by repeatedly claiming that £350 million-a-week was being spent by London on EU membership.

Johnson, who is one of the favourites in a crowded field of candidates to replace Theresa May as the next Tory Party leader and British prime minister, made the statements during the 2016 EU referendum; that claim about UK spending was also infamously displayed on the side of a bus.

The summons comes resulting from a private lawsuit brought by businessman Marcus Ball, who claims Johnson had purposely lied about the true costs of Britain’s EU membership.  (RT)

October 27, 2019 byTSM Web Desk No Comments
ISIS leader Abu Bakr al-Baghdadi is believed to have been killed in a raid conducted by the US military in northwest Syria on Saturday, according to a senior US defense official and a source with know