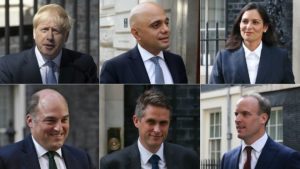 Boris Johnson’s new cabinet will meet for the first time on Thursday morning, before the new prime minister addresses the House of Commons.

And Sajid Javid became chancellor – as more than half of Theresa May’s old cabinet, including leadership rival Jeremy Hunt, quit or were sacked.

Following his appointment, Rees-Mogg, who led the pro-Brexit Tory European Research Group (ERG), denied the new cabinet had seen a “purge of Remainers”.

He told ITV the new cabinet was made up of “simply people who are prepared to leave on 31 October” and there was a “need for a different team”.

Javid and Truss – who backed Remain in the 2016 referendum – had also been given key roles, he added.

The UK was originally supposed to leave the EU on 29 March but the deadline was moved to 31 October, after MPs rejected Mrs May’s withdrawal deal three times.

Former Foreign Secretary Jeremy Hunt said he had been offered an alternative role but had turned it down, while leading Brexiteers Penny Mordaunt and Liam Fox were also replaced as defence secretary and international trade secretary respectively.

Both supported Hunt in the Tory leadership contest. BBC

More than 40 die after Indian bus plunges into gorge

June 21, 2019 byRandev No Comments
At least 44 people have been killed in India after a bus plunged into a gorge, officials say.