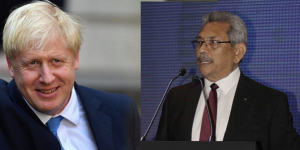 Rajapaksa taking to his twitter handle today congratulated Johnson on his landslide win, and wished the new Prime Minister, the Government and the people of United Kingdom the very best.

Meanwhile, Former Minister Harin Fernando, who took to his Twitter account to congratulate Johnson on his victory said,  “Conservatives have a sweeping victory. Congratulations to my Conservative friends. The message is clear. USA UK India even Sri Lanka have proved its nationalism over liberalism. The cycle continues.”

October 23, 2020 byCharindra No Comments
A shopping complex in Homagama has been temporarily closed after a worker tested positive for the COVID-19, PHIs confirmed.