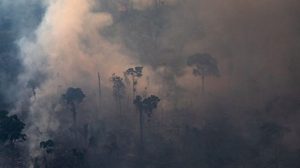 Brazil has banned setting fires to clear land for 60 days in response to a massive increase in the number of fires in the Amazon rainforest.

The decree was signed by President Jair Bolsonaro, who has faced intense criticism at home and abroad for failing to protect the rainforest.

A leading Brazilian environmentalist warned on Wednesday that the “worst of the fire is yet to come”.

South American countries will meet next week to discuss the crisis.

It remains unclear what impact the ban will have, as environmentalists say the overwhelming majority of forest clearance in the Brazilian Amazon is already illegal and enforcement is lax.

Environmentalists say the increase is due in part to policies enacted by Bolsonaro’s administration.

What else is Brazil doing?

Bolsonaro has accepted Chile’s offer of four planes to fight the fires, the most in Brazil since 2010 – but he has refused a G7 offer of $22m (£18m) following a spat with French President Emmanuel Macron.

The government says it has deployed 44,000 soldiers to seven states to combat the fires. That came after Bolsonaro last week said the authorities did not have the resources to fight the blazes.

The justice ministry says that federal police officers would be sent to the fire zones to assist other state agencies in combating “illegal deforestation”.

On Monday Brazil’s Defence Minister Fernando Azevedo e Silva told local media that the situation was “not simple, but it is under control and cooling down nicely”.BBC

November 21, 2019 byTSM Web Desk No Comments
A top US diplomat has told an impeachment inquiry that he followed President Donald Trump's orders to put pressure on Ukraine to investigate his Democratic rival Joe Biden.

Speaker of the Parliament signs blueprint of 20A