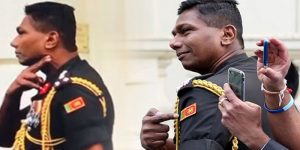 Fernando was a Sri Lankan Diplomat and the former Sri Lankan Defence Attaché of the Sri Lankan High Commission in London.

Fernando was found guilty of violating section 4A of the Public Order Act, after a protracted legal battle.

“I  have  no  doubt  he  intended  to  cause  at  the  least  alarm.  They  were  purposeful  gestures,  made  as  the  Brigadier  was  staring  at  these  protesters.  The Brigadier was a senior officer in  uniform  wearing  medals.   Unlike  the  other senior  officer  there,  his  body  language  appeared  to  be  arrogant  and  intimidating.  There were three gestures and not just  one.   In  the  context  of  the  relationship  between Sri  Lanka  and  Tamil  Elam  protesters  he  must  have  known  that  it  would  have  been alarming  at  the  very  least  to  the  protesters  who  saw  him  do  this.”

September 15, 2019 byThe Sunday Morning No Comments
The Parliamentary Select Committee (PSC) probing the 21 April attacks is to meet President Maithripala Sirisena tomorrow (16) to finalise matters regarding the latter’s appearance before the Committee