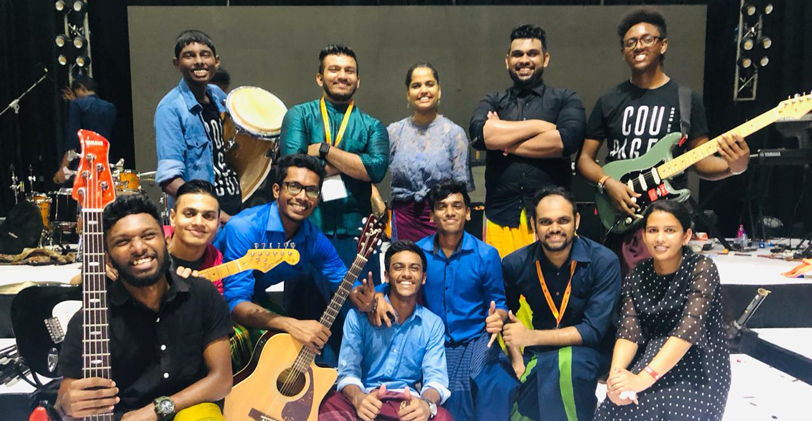 A musical response to the Easter Sunday attacks

We all have at some point in our lives heard the phrases “music is healing” and “music is a language that has no barriers”. During these trying times where the majority of our nation is mourning and grief-stricken, these individuals along with their teams have come forward and proved that music in fact is healing and that it can give great comfort to those in distress. 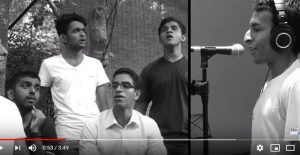 Russell Valentine shared with us about the video the Old Joes’ Choir released after the recent devastating incident. It must also be highlighted that it was shared a lot and appeared on all our social media homepages multiple times.
“We had plans to release a few songs soon after the usual Avurudu and Easter break, but for obvious reasons, we were forced to glue ourselves to our homes to stay safe and put. This made us feel extremely frustrated. So the three of us, who are the choir leaders, thought of what we could do, given the sensitivity of the situation and it was during that time one of the choral directors messaged about arranging a mash-up of some sort to shed light of hope.

“Usually, at the Old Joes’ Choir, singing is just an excuse for us to meet up and have a good time. And that Sunday morning (a week after the attacks) was no different. But as we started practising and feeling the song more and more, we realised it was so much more than that. So much more that we could drive an important message we felt Sri Lanka needed now more than ever…a simple message of hope and unity!” he shared.

He said that the team couldn’t perform live at any location, let alone at a church since every public location was locked down. This led to the idea of releasing the song online, with the hopes of the social media ban being lifted.

“We were extremely cautious in handling the sensitivity of the situation and respecting all those affected; we completely avoided using footage and images of individuals in their most vulnerable state, only limiting ourselves to our beliefs of hope and unity,” Valentine assured.

He went on to say that music was a very powerful medium to communicate strong messages. According to him, music was therapy and it had been great to see more and more musicians coming forward to join hands in the broader efforts of healing the nation through music; many memorable songs like “We are the World” that united many hearts through music in its purest forms. And remarking on their role as singers, he reiterated that if what they did influenced at least one heart towards positive change, their objective would be fulfilled.

“We must say the OJC is quite blessed to have a strong group of in-house experts to handle and cover all bases. We’d like to credit Geethika Cooray, Denham Hakel, and Chamara Perera who played a key role in the success of this production. We would also like to thank all individuals who were touched by our tribute mash-up. It was particularly heart-warming to find people who don’t generally fancy choral music talk about the tribute with genuine passion,” said Valentine, expressing his gratitude.

Concluding the discussion, he said: “Our message to all victims and survivors of the Easter Sunday attacks in Sri Lanka is quite straightforward…We are with you. We know that with each second comes a memory of lost love, hopes, and dreams. Let this rendition and all musical pieces done in remembrance be a reminder that our loved ones who may have left this earth will forever live in our hearts where they will be always loved. May they find eternal peace in the arms of God.”

We also spoke to Christopher Wijesinghe from History Maker Generation about the song they composed, recorded, and released as a response full of love and peace attributed to the Easter attacks.
A couple of days following the terrorist attack on the nation, Wijesinghe received a call from a pastor – Pastor Dinesh Michel. They work together in a team called the “History Maker Generation”. The team was left heartbroken for the loss of our people and spent hours in prayer for the peace of the nation and for everything of anguish to settle soon. As Pastor Michel called Wijesinghe, he asked if a song could be written; a song on healing, peace, and reconciliation.

“I sat in front of my piano and I started praying. I saw an image of a white dove flying over our nation and a white flag that was flying high. I believe it symbolised peace surrounding our nation, Sri Lanka. With that image stuck in my head, I started writing this song ‘ Samaya Wewa’. The words and the music just kept flowing and I completed composing the song in just a couple of hours. I fell in love with it immediately as it was not just a song for me, but a prayer to God and a declaration of love and peace to my own country,” he explained, adding that although they didn’t have much time to do a proper track and recording, he met up with some members of the team at a church and recorded the song with the available facilities and resources.

“We keep hearing the word ‘Easter’ these days. What does it actually mean? On Easter, what we celebrate is the death and resurrection of Jesus Christ. What was his message? His message was one of love and salvation. His life was full of love and care. He helped people, cared for them, restored them, and most of all loved them! He came to bring peace to everyone – the poor, the rich, the sick, the healthy, the rejected, the depressed, the oppressed, the hopeless, the homeless, the lonely; the whole of mankind. He showed the way to find joy, happiness, peace, and satisfaction! And his message of love was not just for Christians. It was for everyone. He taught the importance of unity and community,” Wijesinghe shared.

Wijesinghe said what he wanted to achieve from the song was for love to flow to every heart and for people to realise the importance of loving and caring for one another in order to make this country as well as the world a better place. Speaking on the power of music, he said that the beauty of music was that it connects people and that it had the ability to reach places that speeches cannot. It carries power to heal and unite; no matter what language one spoke, music had the ability to speak to hearts.

“Our message as a band for all Sri Lankans is to stop blaming everything on the government, systems, and people around. Stop talking our country down! It’s time that we take Sri Lanka to its greatness by loving and caring for one another, throwing selfishness away and helping each other, becoming the change you wish to see, and working hard and giving your best to take Sri Lanka to the pride it deserves. To see the flag of our nation up high in glory, so that the world will see who we really are, let’s make the pearl of the Indian Ocean a blessing that shines upon the whole world,” Wijesinghe said with hopes of encouragement. 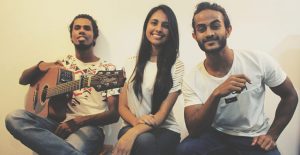 We then spoke to Shehan Meshak Palihawadena, along with his two friends Yohan Perera and Malisa Niyomi, about recreating a popular BNS song “Hadamu Sri Lanka” in response to the Easter attacks, with the hope of spreading the message that “together we are stronger and together we can rebuild”.

“We as Sri Lankans have constantly faced hardship, but we have always stood together and helped one another. With the situation at hand, we felt that we needed to do something about all the negativity circulating around. That’s when we decided we should spread positivity with a song that has a powerful message as this one. We were determined to get this done as quickly as possible and we put the whole song together in the course of one day, and with this cover, we wanted to bring hope and remind people that together we can rebuild.

Shehan went on to share that music has always played a strong part in Sri Lankan culture; it influences each and every one of us deeply. And if there was a way to reach everyone’s heart and soul to remind them that “we are stronger together and that we are one”, he said, this was it.

Beats of One Nation – Ken Lappen with Sri Lanka Unites 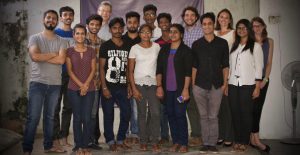 Finally, we also spoke to Ken Lappen, who very recently was part of a very interesting project – Beats of One Nation. The idea has initially been brought up to Lappen by Randhir Witana, who was currently working very closely with Prashan De Visser, the President and Founder of Sri Lanka Unites.

“Since Randhir is an active member of the Sri Lankan music industry, he wanted to reach out to young people through music and give a hand to those who loved singing or being lyricists. He spoke to me about his idea and I immediately started planning on the tracks. Randhir and Prashan were in charge of finding the most talented contestant from each province and we had Rudy Christiansen cover up the entire project into a wonderful documentary,” Lappen revealed.

Accordingly, his main concern was the diversity of the group. All nine contestants had been from very different cultural backgrounds and Lappen wanted to include that in the tracks. Additionally, he had also wanted the tracks to relate to every ethnicity so that whoever listens to the tracks could relate to it.
“Music can heal so much – that is what I personally believe. We see that lots of artists have incorporated world peace, harmony, love, and unity in their music and it has made an impact on the listeners. Music has a huge potential when used in conflict transformation, to prevent or resolve conflict by non-violent means. It can assist in processes of healing and rehabilitation. Moreover, the world of music often can be a place of comfort, consolidation, and a safe haven,” he expressed.

All the contestants have been selected from diverse groups, where there had been communication difficulties at times. Also, the experiences from the war or communal tensions were different. As Lappen explained, they wanted to add them in the lyrics, but to mainly show how working together can make a change. All in all, their (the contestants) main goal was working together in creating harmony throughout the nation with the songs they composed and the lyrics they wrote. At the end of the project, he said, the friendship that was built among them showed the team the true purpose of doing such a great project.

Taking his time to express gratitude, Lappen said: “I would like to thank Sri Lanka Unites President and Founder Prashan De Visser for the amazing work he is doing through the organisation, building confidence in young people’s lives, giving them so many opportunities, and also for making me a huge part of this great project. I also thank Randhir Witana for all the support and mentoring he provided throughout the project to these young individuals. Lastly, a big thank you goes to Rudy Christiansen and his team for covering up such a wonderful documentary.”

‘People made fun of me’: Janani Cooray on performance art and the Lankan perception

Dos and don’ts of camping

January 13, 2019 bythemorninglk No Comments
Camping is a fun and inexpensive way to travel. If you are short for cash, but also long to spend a night or two away from your regularly scheduled programme then camping is your best bet.