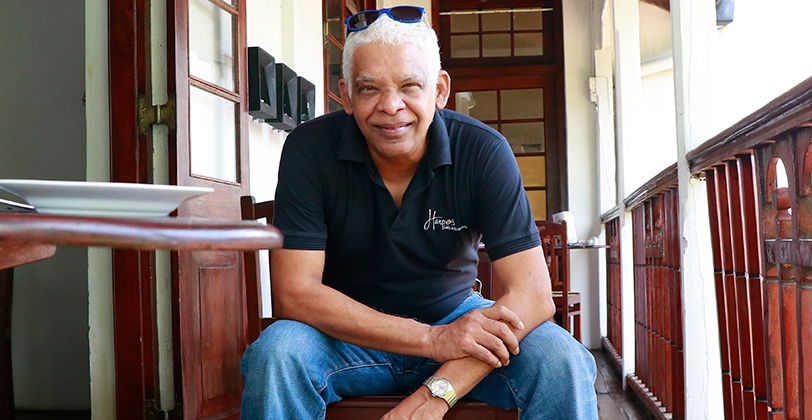 The tricky business of bouncing back

The Commons Coffee House has always been a popular spot amongst local café goers and it is the very first local coffee house in the island. In that, it has quite uniquely remained that one of the most “common” things to do at the venue is to order a kottu.

Even to this day, with The Commons having done it for years, things like kottu are just not staples in cafés. This month, The Commons has taken it a step further and introduced their brand new “My Island” campaign where they’ve introduced – in addition to their already famous kottu – other equally Lankan dishes that are just perfect café staples like rotti and hoppers.

We thought we’d catch up with Harpo’s Cafés and Restaurants Founder/CEO Harpo Gooneratne to talk about this new venture, and as a pioneer and renowned name in the Lankan restaurant and hospitality scene, to paint a general picture of the current landscape in Sri Lanka when it comes to the restaurant business.

Speaking about the new campaign at The Commons, he said that it is the best time to elevate the Lankan style in business. As the world’s gaze is upon us, what better time than now to showcase what Sri Lanka has to offer in terms of flavour and diversity? He said that The Commons has always celebrated Sri Lankan cuisine and this is just a natural next step.

While local food is fantastic for tourists to try as a novelty item, we wondered whether it will fair all that well with locals, considering we have this stuff all the time. To this, Harpo simply said: “Do you know any Sri Lankan who would say no to a nice hot kottu at the end of their day?” To be honest, that pretty much summed it up; local flavours are for everybody.

When we inevitably brought up the Easter Sunday attacks, which has unfortunately now become a reference point to discuss anything regarding development here in the island, Harpo drew attention to the fact that it’s not all bad, stating that of course it is undoubtedly a tragedy but if we are to look for something positive, the fact that we have the eyes of the world upon us now is a silver lining. If we were ever once an obscure island nation, we’re certainly not anymore; international news spots have made sure of that.

He said that social media has been instrumental in getting Sri Lanka out there, stating that it really does make life easier. “Everything is available to everyone which really helps get the word out. If you’ve something unique to say, then you can bet that someone will listen.”

Speaking about the tragedy and its aftermath, Harpo said that while it is not in any way an exaggeration that Sri Lanka’s hospitality trade truly took a hit as a result of the attacks and it was felt heavily all throughout. There’s also the fact that it was that much more jarring due to us going straight into an off season. While March had everything on the up and up we were preparing for the off season, and then tragedy struck, making everything 10 times more terrible.

Despite this, he said that things are really picking up. As summer’s coming, there is going to be an influx of tourists, especially backpackers who don’t pay much heed to travel warnings – “they just get on a plane and go”. There are also locals who are returning to their motherland for the holidays – university students, career professionals, and others who are all jouncing for a taste of home.

In preparation for this onslaught of consumers, Harpo said that we should be prepared to offer them a good product; not just any good product, but a good product at a good rate. “It’s important that we offer people a great deal,” he said, adding that when it comes to the hospitality and restaurant industry, we have to start looking inward for sales as well. A majority of Harpo’s properties are in fact geared towards locals, and he said it is all about being affordable and providing good value for money. He spoke excitedly about a recent experience he had at a local restaurant, stating that the place was absolutely packed and people like to go where other people are hanging out. This place was buzzing, and apparently it was because there was a really good offer that day. This is the type of thing we should focus on having, Harpo said.

Speaking about the Government’s role in all this, Harpo said that it is a grave responsibility that befalls them, and we as an industry should step it up and lend a hand. He said he believes that actual work is really being done and it is promising. However, he also mentioned that the way things are going, our country cannot sustain the high-end market rates; we mustn’t out price ourselves. For now, we are most suited for low to middle market rates, and in order to stay in that bracket, there must be concessionary rates when it comes to imported goods.

Speaking about the political situation, he stated that the unstable nature of the country’s politics also vastly affects the outcome of these industries, providing that from an investor’s standpoint, we are unstable right now. With the elections looming around the corner, business will slow down and everyone will want to wait and see. At present, we are a country divided and in about six months’ time, it will be irrelevant who is appointed as long as we are one voice.

But he also stated that we shouldn’t wait for the Government to sort out their issues. We should get a move on, he said: “Sri Lanka is a resilient nation, nobody can dispute that; look at how we’ve bounced back time and time again. I am hopeful that this time, it will be no different, and we will soon begin to thrive. We just need to work a little bit harder.”

What to expect from Taboo 2020

March 1, 2020 bythemorninglk No Comments
Taboo, organised by Pulse, is happening today, 1 March 2020. The purpose of Taboo is to address the issues that our society is faced with and try to find solutions to these problems through discussion