Prepare to be entertained 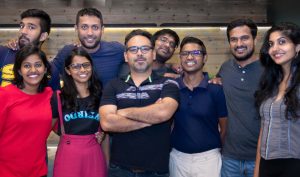 Improv Island, a Colombo-based improv troupe, hosted their fourth show since its inception, at Hatch Works, Colombo Fort on Sunday, 4 August at 5 p.m.

The event featured a number of short-form improv challenges which doubled as extremely entertaining and at times, interactive.
One such example was the “paper chase game”, which required the audience’s quiet participation as they were asked to write statements on pieces of paper and throw it on to the floor, after which, the troupe performing a scene would pick up one piece of paper and incorporate the statement on it into their performance. The performances each lasted between four and eight minutes to form a 50 to 70-minute show.

We spoke to Improv Island Director and Founder Cyrus Ziccaji, who stated that as he was a part of an improv troupe in Pakistan, he thought that it would be nice to do something here in Colombo as well.

He said: “I was one of the founding members of an improvisational comedy troupe that performed an average of 30 shows per year for five years between 2001 and 2006 in Pakistan. We represented Pakistan in ‘Contacting the World’ in Manchester in 2004, as well as performed shows for a number of corporations and sponsors in the country.”

He also added: “We went on to produce content for television before disbanding when too many of us had left the country. Aside from being a modestly lucrative part-time gig, it is among the more meaningful and fun things we did with our lives.”

Cyrus said the BlackFish Improvisational Comedy Troupe – his old troupe – was the launch pad for a number of his team members into full-time careers as writers, actors, and performers around the world, as well as a platform for encouragement for many generations after them making their own forays into performance and entertainment.

When asked what it takes to join such a troupe and to make it in the field, he said all that one really needs is passion and commitment; an interest in performing and generating original content by learning the art and skill of improvisation, to take the art seriously, to visualise its huge potential and contribute towards increasing its scale and success, respecting other performers, and having a good time in the process.

He said that the art of improvisation can be taught and developed through practice. There are rules, exercises, and games that progressively develop different aspects of the skill in well-structured workshops.

Though these workshops, which he himself held twice a week for two hours at a time, a troupe was now selected.

In addition to those selected members to continue training, these workshops are exclusively for personally recommended potential team members.

He said that prior acting/performing experience is not a must.
For future shows and more information, please visit www.facebook.com/improvisland/.

Hospitality at its finest down south

December 18, 2018 bythemorninglk No Comments
Amari Galle, placed at its exuberant location, oversees the blue waters and the golden, sandy shoreline of the south.